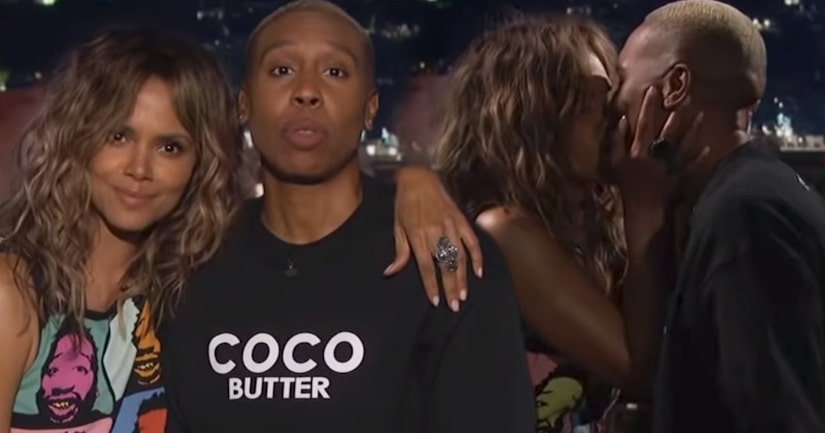 Waithe ended up getting the “Halle Berry juice” she wanted.

Lena Waithe had a passionate introduction into the world of late-night when she guest-hosted "Jimmy Kimmel Live!" Wednesday night.

After Kimmel’s pal Guillermo pressed the "Berry Button" during the beginning of her monologue, the "Master of None" star received a surprise visit from none other than Halle Berry herself. However, the Oscar winner’s presence wasn’t her only present for Waithe as she also planted a big smooch on the actress’ mouth.

"I was out with all my friends, celebrating…and you pushed the button, so I ran over here as fast as I could," an out of breath Berry told Waithe, who replied, "That’s weird because you don’t seem to be sweating, you’re only a little bit out of breath."

"Well ’cause Halle Berry don’t sweat," the "John Wick: Chapter 3" star said in response, adding a hair flip. "So, now that I’m here. Baby, what can I do for you?" she asked.

"Look, I need some inspiration. Like that Oscars speech you gave, that got me hyped," Waithe replied, referencing Berry’s famous acceptance speech from the 2002 Academy Awards. "I need you to give me some of that Halle Berry juice."

As the late-night show dimmed the lights, Berry faced Waithe and gave her the ultimate pep talk.

"Lena, you know I know you, right? We’ve worked together," she said. "So I know that you are a force of nature. You are a beautiful African American queen… Lena, tonight you are a writer, an actor, a producer and tonight you are a late-night comedian. You about to slay this show!"

"And you are already winning, girl, because you are dressed way better than Jimmy ever was," Berry joked.

The "Monsters Ball" actress then asked Waithe if she needed more inspiration. "Now, you good or do you need something else?" Berry asked.

Although "The Chi" star expressed she was all set, Berry said Waithe needed "something else." She then grabbed Waithe’s face and gave her a huge, passionate kiss.

See how it all went down in the video, below.