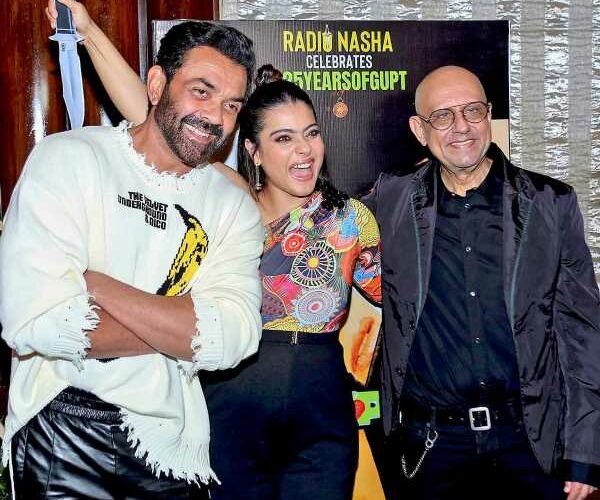 ‘All my life, I have made expensive films. This time, I want to make the least expensive film ever made in Bollywood.’
‘It’s an honest attempt to climb Mount Everest without knowing if I will reach the peak.’

On July 4, 1997, a murder mystery called Gupt: The Hidden Truth exploded in the theatres, and becoming a talking point with its unexpected ‘villain’.

Kajol, a top-ranking heroine, with films like Baazigar, Dilwale Dulhania Le Jayenge and Kuch Kuch Hota Hai to her credit, shocked everyone by playing a psychopathic killer.

Twenty-five years later, in conversation with Rediff.com Senior Contributor Roshmila Bhattacharya, Rajiv Rai, its writer, co-producer, director and editor, reveals, “I would not have made Gupt without Kajol.”

Rajiv Rai, who turned 67 on July 18, is now making a comeback to film-making after 18 years with another suspense thriller.

“I could have easily given into the demands of my fans and made a Gupt 2 or a sequel to Tridev or Mohra,” he says in this exclusive interview, “But at this stage in my life, I will not be comfortable going back to what I did before.”

‘I started working on the story of Gupt before Mohra released’ After Mohra, I wanted to do something different, without moving too far away from the action thriller genre which I enjoyed watching and making.

That’S the idea of a murder mystery with an element of surprise took root.

I started working on the story of Gupt, a completely original idea, before Mohra released, developing it in my head, then getting an assistant to put it down on paper.

Subsequently, I worked on the screenplay with Shabbir Boxwalla, going scene by scene, shot by shot, and on the dialogue with Naeem Sha.

While the story is distinct from the screenplay, I believe that if the screenplay and dialogue become different departments, there is the risk of misinterpretation.

The whole process took around two years, but at the end of it, we had a taut suspense thriller which I titled Gupt: The Hidden Truth. I had studied in an English medium school, but I love all Indian languages, including Tamil, Telugu, Malayalam, my mother tongue Punjabi, Sanskrit and Hindi, which is a link to our history and heritage.

I may not be able to express myself too well in Hindi, but I read a lot and came across the word ‘gupt‘ in the scriptures.

Also, growing up, whenever anyone shared a secret with me, I was told, ‘Isse gupt rakhna (Keep it confidential, a secret).

The word had an interesting ring to it and I thought it made for an apt title.

I was warned that it might be mistaken for a sex film, like Gupt Gyan which had just released.

It was also pointed out to me that gupt was not a familiar Hindi word and some may not understand what it meant.

I did want to go with something more familiar, like Raaz, much as I loved the Rajesh Khanna crime thriller for its awesome camerawork.

I wanted Gupt and stood my ground, reasoning that if people were intrigued, they would watch the film.

‘I would not have made Gupt without Kajol’ Gupt was a two-heroine film and from the inception, I was very sure I wanted Kajol to play Isha Dewan.

But I wasn’t sure if she would agree because back then, heroines did not gamble with negative roles.

I knew her parents and I set up a meeting with her.

I left for it knowing it was a critical day for me and could shape my destiny.

Kajol was the key to my script.

If she agreed, I knew Gupt would become a huge film.

If she didn’t, I had four-five other ideas and would have chosen to make one of them.

I would not have made Gupt without Kajol.

To my delight, she was excited to play a murderer, and her sister, Tanishaa, was equally excited for her.

Kajol is a receptive girl and a fantastic actress, who comes from an intelligent family and working with her was a wonderful experience.

‘I always had Manisha Koirala in mind to play Sheetal’

I always had Manisha Koirala in mind to play Sheetal, the other girl who was equally important to my script.

I’m grateful Manisha agreed to do the film despite knowing that the story was on Kajol’s character, Isha.

According to certain reports, I had initially offered the role of Sheetal to Raveena Tandon.

I want to refute this, once and for all.

While Raveena was a top-ranking star then and a gifted actress who I would love to work with again, she had been the leading lady of my last film and I didn’t want Mohra to reflect on Gupt in any way. The only one from the Mohra cast I approached was Naseersaab (Naseeruddin Shah), who is the first person who comes to my mind whenever I make a film.

But his dates were stuck and it was he who recommended Om Puri for the role of Inspector Udham Singh, an actor I had wanted to work with.

I learnt later that they often recommended each other’s names to producers. Naseersaab had even called and spoken to Om Puriji personally for Gupt.

He was an excellent choice, but I’m sure if Naseersaab had played the role, he would have done it slightly differently. 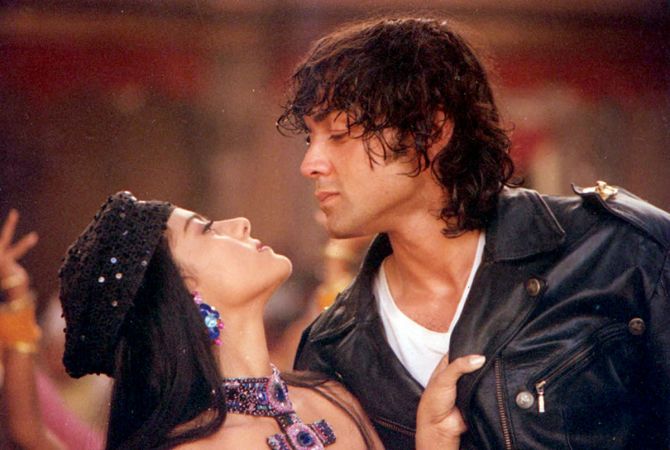 I had worked in two films, Tridev and Vishwatma, with Sunny (Deol), who is a dear friend with whom I share an excellent working relationship.

In Gupt, I wanted to cast Bobby as the son of the victim towards whom the finger of suspicion points from the time the murder happens.

It’s teamwork that notches up cricket and football wins, and makes the cash counters jingle.

I’m grateful to every one of my team members, including the actor who was there in just one passing shot and the junior most spotboy, for making Gupt the cult film it is today.

Some of them like Om Puri, Sadashiv Amrapurkar and my DoP Ashok Mehta, who went on to become my best friend, are gone today. I miss them.

‘I wanted every song in Gupt to stand out’ 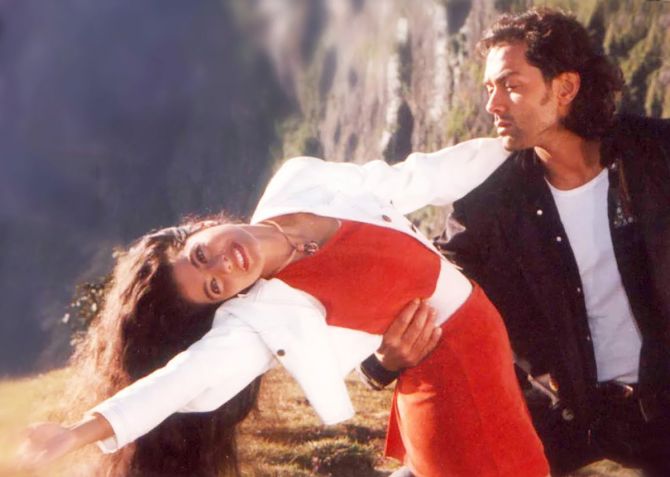 The films that came before Gupt had great music, but only a couple of the songs were chartbusters.

My brief to my music director, Viju Shah, was that every song of Gupt should stand out, the viewer should be confused about which one he liked more.

It was a tall order because they were all situational songs.

We did not have a single item song to bring a shower of coins in the theatres.

But to Viju’s credit, he delivered a fabulous album, with songs like Gupt Gupt, Duniya Hasino Ka Mela and Mere Khwaabon Mein Tu.

There has been a lot of talk about how he borrowed from Western tracks so let me point out here that every sound has a source.

And when it comes to Hindi cinema, the lyrics set the notes and bars apart.

I don’t write music, but I know what I want and Viju made a suspense thriller special with his songs.

He missed out on the Filmfare Award for Best Music, but took home the trophy for Best Background Music.

Kajol made history by becoming the first actress to win the Filmfare Award for Best Performance in a Negative Role while I bagged the Black Lady for Best Editing. 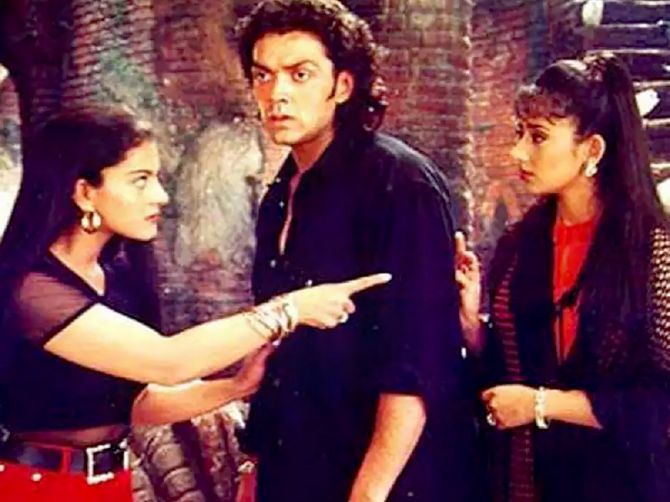 Before Gupt, I had a mass following with films like Tridev and Mohra.

Being a distributor (Gulshan Rai)’s son, I had a finger on the pulse of the audience and sensed that times were changing, that we were moving towards what is today a multiplex and Netflix audience and needed to make more sophisticated films.

Gupt was a film for the classes and I wondered if the man on the street would like it.

To my surprised delight, it was immediately liked.

No one could guess who the murderer was and even when after the spoilers, people kept packing the theatres.

The film was a blockbuster and more such films followed.

Slowly, Bollywood closed its doors on the mass entertainers which is why South films like KGF, RRR and Pushpa are such huge hits today.

My last film was Asambhav in 2004, after which I went into semi-retirement.

Now, grateful to be alive, I want to work, and since this is the only work I know, after 18 years, I’m back with another murder mystery which is nothing like Gupt.

I could have easily given into the demands of my fans and made a Gupt 2 or a sequel to Tridev or Mohra.

But at this stage in my life, I will not be comfortable going back to what I did before, making films whose stories have no scope to be carried forward.

So, I decided to make a new film instead.

‘Want to make the least expensive film ever made in Bollywood’ All my life, I have made expensive films.

This time, I want to make the least expensive film ever made in Bollywood.

With no budget but a great script, featuring not immediately recognisable faces from theatre, television and OTT but actors who are phenomenal talents, going for a small theatrical release with a wish to make the biggest hit.

No, it’s not a publicity gimmick.

It’s an honest attempt to climb Mount Everest without knowing if I will reach the peak.

I want the film fraternity to appreciate my effort, ask themselves, ‘Is this possible?’

Even if I am not successful, it’s still a step forward.

We will roll in August and I plan to finish shooting by October.

I have a large cast of 40-50, actors you may know but who are newcomers to me, whom I want to give an opportunity to feature in a feature film.

It’s not a typical action film, there’s no scope for even background music, and it will only have two title tracks and one promotional song.

My new film is an experiment and I’m making that very clear because I don’t want people to say later that they wasted their time and money.

Critics may see this as a smart way of covering up for a bad film.

Let me assure you, this suspense thriller is the best film of my career and I hope that like Gupt, it will be remembered 25 years after its release.