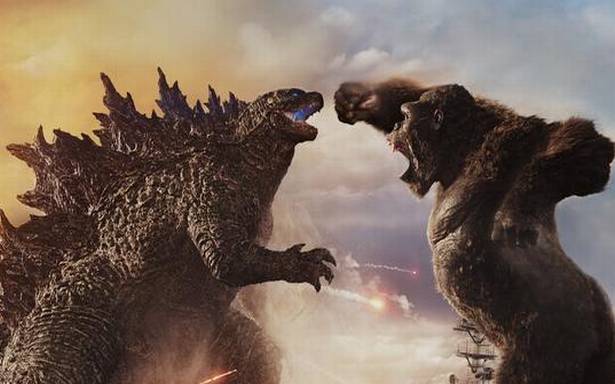 The two Titans face off against each other in the ultimate battle, but is there another kaijū around?

This is the most fun I have had at the movies in a long time. There is Kong looking like a cross between an “ape named Ape” from George of the Jungle and Shrek, yawning and scratching himself as he stumbles awake in his little island paradise of Skull Island. There is also Godzilla, all small eyes and spiny fins swimming around the oceans of the world raising Cain. Mechagodzilla (a robot Godzilla), a conspiracy theorist, wise-cracking teens and eye-popping CGI round off the recipe for unfettered joy.

The fourth movie in Legendary’s MonsterVerse, following Godzilla (2014), Kong: Skull Island (2017) and Godzilla: King of the Monsters (2019), Godzilla Vs Kong pits the two Titans against each other. There are evil humans up to their usual wickedness. There is a mad scheme to go into the world within the earth (yay hollow earth!) to take Kong home, as well as harness some sort of primeval energy source to save the world.

The journey to the centre of the earth is led by Dr Lind (Alexander Skarsgård), a disgraced geologist, whose brother died when he went looking for the world within the earth and was crushed by inverted gravity (hurray for crazy science). Ilene Andrews (Rebecca Hall) and her adopted daughter Jia (Kaylee Hottle) come along as Kong has also adopted Jia and communicates only with her. Maia (Eiza González) is the evil boss lady doomed to making stupid comments.

Madison (Millie Bobby Brown), with her nerdy friend, Josh (Julian Dennison) and conspiracy theorist, Bernie Hayes (Brian Tyree), in her attempt to find the reason for Godzilla’s behaviour (swimming around oceans whipping aircraft carriers with its tail while its eyes blaze in radioactive fury), ends up in Hong Kong in the lair of Mechagodzilla. Ren (Shun Oguri) sort of controls Mechagodzilla, which is a robot Godzilla attached to the three-headed Ghidorah.

Madison’s dad, Mark Russell (Kyle Chandler) does not have much to do except run about looking worried, while Demián Bichir as evil CEO of Apex, Walter Simmons, does much joyous gnashing of teeth. The humans are all incidental to the swathes of CGI destruction and Kong trailing his gigantic paw in the ocean as he lies on a gargantuan aircraft carrier as if it were just a tiny little raft. Oh joy.

Godzilla vs. Kong is currently running in theatres

03/24/2021 TV & Movies Comments Off on ‘Godzilla vs. Kong’ movie review: A no-holds-barred monster spectacle for the ages
India