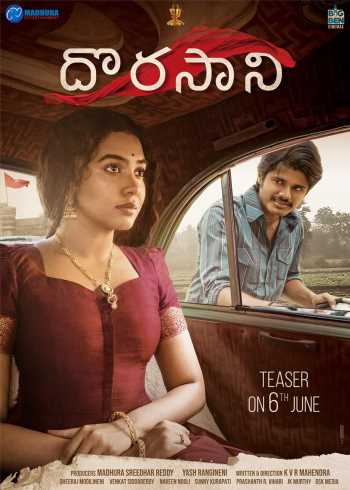 Hero Rajasekhar’s daughter Sivathmika will be the first ever star kid to make her debut straight as a heroine when we look at the present generation Telugu star kids. And here comes her debut film “Dorasani” first look poster.

Featuring in the role of a big landlord (Dora)’s daughter in the 1980s Telangana region, “Dorasani” has Sivathmika playing the title role, while Vijay Devarakonda’s brother Anand Devarakonda plays the leading man, in the role of the son of a labourer. We have to say that first look speaks for the characters as Sivathmika suits the role quite well, while Anand looks like a perfect fit.

Newcomer director KV Mahendra who has earlier made a couple of short films that revolve around Telangana theme is crafting this violent love story. The director is said to have written the story for 5 years and 42 versions, before taking the film to the floor.

As the teaser of the film is set for June 6th release, we have to see how this vintage love story actually looks like as they have shot the most of the film in real locales in some old Telangana villages.

05/30/2019 TV & Movies Comments Off on First Look: Dorasani And Her Lover Impresses
India