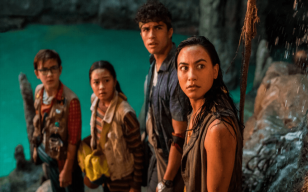 This great-looking Netflix outing is an entertaining mix of action, adventure and feel-good family moments, despite being a tad too long

A sweet, adventure film with a judicious mix of action, adventure and emotion, Jude Weng’s directorial debut, Finding ‘Ohana, could have done with some trimming. Twelve-year-old Pili (Kea Peahu) loves quizzes and quests. Her elder brother, Ioane (Alex Aiono) better known as E, is annoying like all elder brothers but loves his sister nonetheless. Their hardworking mother, Leilani (Kelly Hu), left Oahu after the death of her soldier husband 11 years ago to make a better life for her children in Brooklyn.

When Leilani’s father, Kimo, (Branscombe Richmond) has a heart attack, Leilani takes Pili and Ioane to Oahu to spend time with him. Pili and Ioane are initially furious at being stuck in the middle of nowhere—with no WiFi on top of everything. Things get better once Pili meets Casper (Owen Vaccaro), another know-it-all 12-year-old, finds an old journal which promises clues to a fabled treasure and Ioane meets Casper’s elder sister, Hana (Lindsay Watson).

The hunt for the treasure and ‘Ohana (meaning family) dovetail one stormy night as the youngsters climb mountains and work out the clues while father and daughter bond in hospital. The adventure with all the Indiana Jones references, including melting Nazi faces, pulleys and counterweights are fun. Speaking of Indiana Jones references, Ke Huy Quan, Short Round from Indiana Jones and The Temple of Doom, stars in the film. The shadow warriors are suitably ominous. The recreations of what happened to Brown (Chris Parnell), Robinson (Marc Evan Jackson) and Monks (Ricky Garcia), the mutinous crew aboard The Peruvian is inventive.

While the conversations of cultural heritage could have been slightly more in depth, Finding ‘Ohana has its heart in the right place. Also looking at the lovely Hawaiian mountains and brilliant sea is one way to travel without the masks and terror.