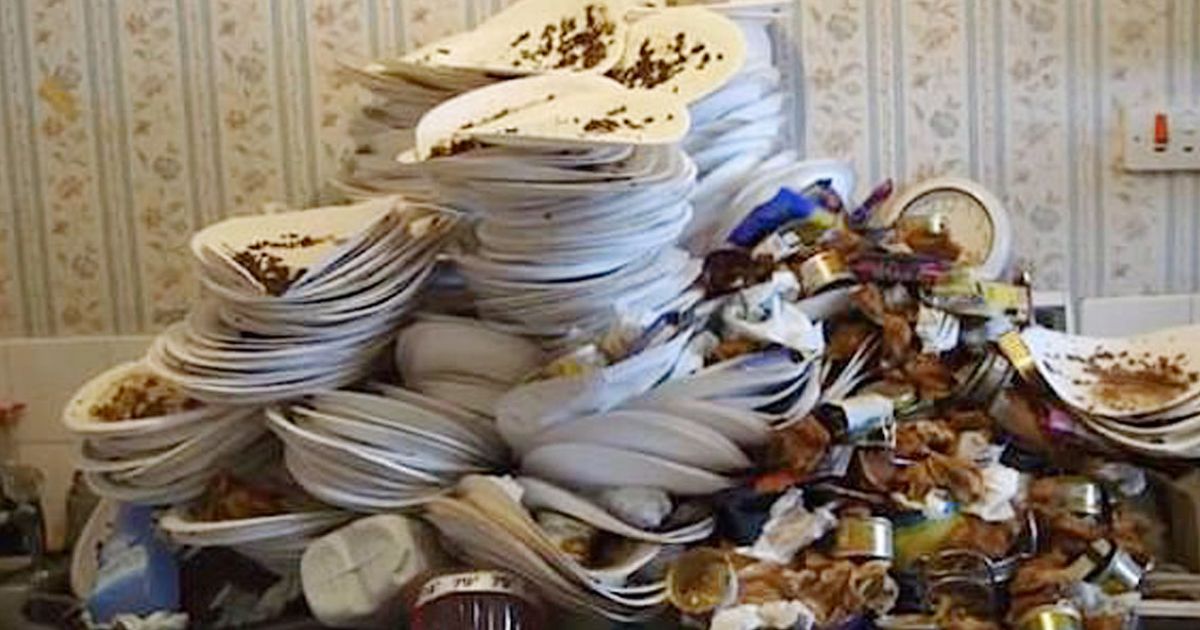 Specialist cleaners were horrified when they discovered an extreme hoarder living in mountains of filth, bugs and her own urine.

Sally-Ann, 47, turned her flat in Dudley, Wes Midlands into a bio-hazard after building up piles of rubbish.

The self-confessed hoarder admits she couldn't even get to her toilet and has been forced to urinate into empty plastic bottles.

There are maggots living in the kitchen, which contains tonnes of dirty paper plates with leftover food.

While her cats sleep around her and poo all over the flat that Sally herself has described as "hell".

The disgusting mess has built up for two years since the council were called in to do a deep clean.

Before this, Sally had not slept in her bedroom for 13 years, with carpet bugs climbing all over her and her bed.

The neighbours complained and a team cleaned out the flat in six days, but the problem spiralled out of control again.

Sally says her hoarding was triggered by her mother's death and struggling to care for her father.

In the Channel 5 documentary, she says: "I couldn’t get to the toilet in time because I’d have to climb over all the rubbish so I started urinating in bottles.

"The cats were sleeping around me as well and they’d end up messing in certain corners of the bedroom.

"I created a hell basically to live in."

Sally is one of an estimated 1.2 million hoarders living in the UK.

Explaining her situation, she says: "It’s not that I can’t throw stuff away it’s that I can’t be bothered too,' she explains in the documentary.

"I think it began when I moved in on my own. My place used to get untidy anyway, like everyone’s does and then all of a sudden I had to put the bin out and I just thought ‘oh my god’.

"I class myself as a rubbish hoarder. I did read an article that some people who are hoarders in sense of collective are very bright and intelligent people. I’m not saying I am, but there are people who are."

She believes her problem began when she moved to her own flat.

Specialist cleaners Caz and T return to the flat and are stunned by the mountains of mess.

They are annoyed that Sally, who did receive counselling and aftercare for 18 months after the first time, had let the filth build up again.

After four days they manage to clean out the flat again and make it livable for Sally.

*Hoarders: Buried Alive in My Bedroom airs on Channel 5 on Tuesday night at 10pm

05/20/2019 TV & Movies Comments Off on Extreme hoarder lived with maggots, cat poo and had to urinate in bottles
India

India Has A New CDS!

Have the Indian stock markets rallied too fast, too soon?