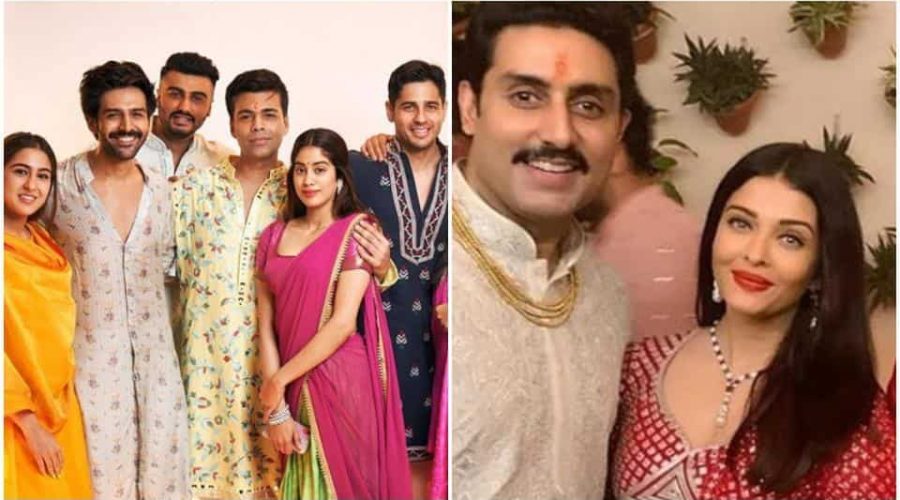 Diwali this year will not be the same as always due to the coronavirus pandemic. However, that doesn’t mean we cannot reflect and revisit all the fun we used to have during the festival season. So today, let us look back at some of the biggest Diwali parties that the celebs threw.

Amitabh Bachchan and his family is known for throwing the most lavish Diwali parties. Last year, all the biggest stars arrived for the celebrations in the most stunning festive attire. There was Shah Rukh Khan and Gauri, Virat Kohli and Anushka Sharma, Shahid Kapoor and Mira Rajput, Akshay Kumar and Twinkle Khanna, Katrina Kaif and many others.

However, there was also a mishap at last year’s party when Aishwarya Rai’s manager Archana Sadanand burned her hand when her dress caught fire. It was reported that Shah Rukh and Aishwarya helped Archana by putting out the fire in time before more damage could be done.

This year, however, the family is not organising a big celebration due the coronavirus pandemic. As per a Mumbai Mirror report, they are also not throwing a party due to deaths in the family.

Last year, Karan rounded up all the youngest stars of Bollywood such as Sara Ali Khan, Janhvi Kapoor, Arjun Kapoor, Varun Dhawan, Kartik Aaryan and others for a special Diwali photoshoot. Everyone dressed up in the loveliest pink and yellow outfits for the photos.

This year, Karan decided to have a much smaller, more cosy party with just a handful of friends. Over the last weekend, he invited over Kareena Kapoor, Malaika Arora, Maheep Kapoor and Manish Malhotra for the party.

Shah Rukh Khan and wife Gauri threw a party for Bollywood in 2018. The interior designer decked up her house, Mannat in hundreds of lamps and posed for pictures with Shah Rukh and their kids–Suhana and AbRam.

Alia Bhatt, Aditya Roy Kapur, Sonakshi Sinha, Jacqueline Fernandez, Kajol and many others had joined the party in their shimmery festive outfits. Kajol had even shared an adorable picture with Shah Rukh, giving him a tight hug, which went viral.

Manish kept his guests entertained as they celebrated over food and drinks and played cards. The stars all posed for pictures and clicked selfies together as well. In one video, Sophie Choudry wished her fans ‘Happy Diwali’ and called Nushrat a ‘big time looteri and a big card player’. Sophie also shared a video of Nushrat enjoying her dinner and also called her a ‘kulcha chor’. Another video showed Manish speaking Punjabi while playing cards. “Kinna sochdi payin hai (How much do you need to think),” he said as his guests rolled in laughter.

Ekta Kapoor is the one who throws the biggest parties for her TV industry friends. While she could not throw as big a party as she had hoped for this year, she did call over a few friends for a get together on Thursday night. Ekta celebrated Diwali with Mouni Roy, Hina Khan, Mrunal Thakur, Anita Hassanandani, Urvashi Dholakia, Sanaya Irani and many other TV stars.

Veteran film producer Anand Pandit has also thrown big Diwali parties with film stars over the last few years. His party in 2019 was attended by Kartik, Bipasha Basu, Niel Nitin Mukesh, Jeetendra and Ajay Devgn.This year there may not be big celebrations owing to the pandemic.