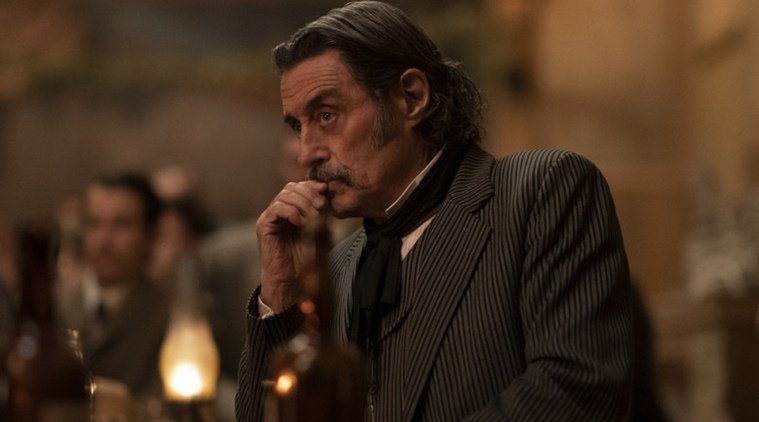 The best part about Deadwood: The Movie, like the series, is the writing and acting. The huge cast of talented actors (led by an impeccable Ian McShane) get a chance to shine due to a compelling story and dialogues. Deadwood: The Movie is a sequel film to HBO’s iconic western TV series Deadwood created by David Milch that ran for three seasons from 2004 to 2006.

Strictly speaking, it is not necessary for you to have watched the series in order to enjoy and appreciate the movie, but some of the stuff might flummox you and a few secondary characters may indeed seem underdeveloped. A rewatch for those who have seen the series would be recommended as I found myself searching the plot summaries of the series to recall what had happened a couple of times.

The movie is set in 1889. The residents of Deadwood are reuniting to celebrate the entry of South Dakota into the United States. George Hearst, now a senator, returns too and serves as the villain of the movie.

Against him are the two lead characters of the story — Sherrif Seth Bullock (Timothy Olyphant) and The Gem Saloon’s owner Al Swearengen (Ian McShane). Towards the end of the TV series, Swearengen was responsible for saving the life of Paula Malcomson’s Trixie from Hearst by murdering some other prostitute from his establishment and presenting her body to pacify Hearst.

Trixie, now pregnant and guilt-ridden, erupts on George Hearst when his procession is passing by. But the events of the movie are really set in motion when Dayton Callie’s Charlie Utter is murdered.

Fingers naturally point towards George Hearst, for the senator had publicly expressed his desire for Utter’s land, and was firmly denied.

The best part about the movie, like the series, is the writing and acting. The huge cast of talented actors (led by an impeccable McShane) get a chance to shine due to a compelling story and dialogues. The Shakespearean, foul language (Al saying c***s***er for the first time in 13 years!) will be music to ears if you watched and loved the show.

The raison d’être for the Deadwood: The Movie is that many felt the ending of the TV series felt incomplete. And sure enough, the movie gives the perfect closure to the entire story and at no point feels extraneous.

David Milch, who was in charge of each and every small part of the TV series, could not be that involved with the movie due to his failing health. He did write the script, but left other responsibilities to Daniel Minahan.

Needless to say, Minahan has done a fabulous job. The pace, though sedate in the beginning, is scarcely slow and the movie, especially if you love these characters and this world, is never boring.

Deadwood: The Movie is a must watch.

06/03/2019 TV & Movies Comments Off on Deadwood The Movie review: A perfect closure to an iconic TV series
India