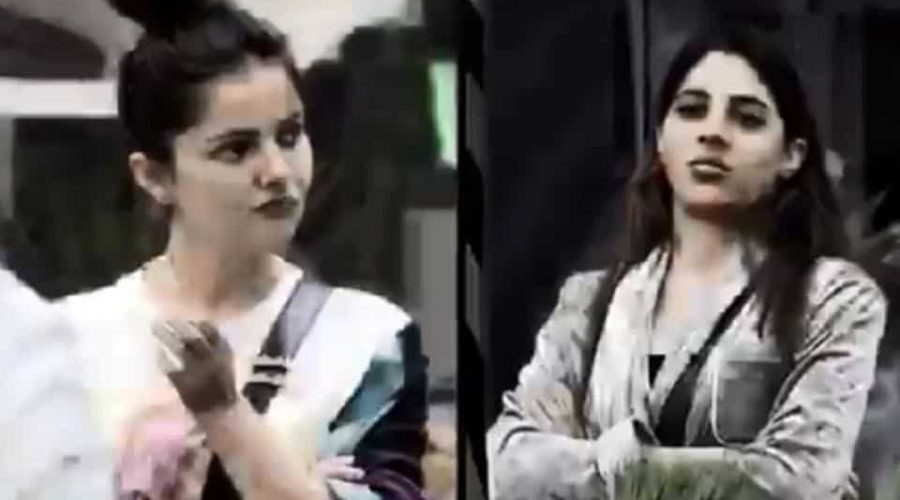 Bigg Boss 14 house has already become a hotspot for fights and arguments with Nikki Tamboli being at the centre of them. Nikki is the first confirmed contestant on the show and can be seen having an argument with Rubina Dilaik, who holds a to-be-confirmed status, in a newly released promo for the upcoming episode.

The new promo shows Nikki and Rubina having a heated war of words in the living room as the latter refuses to accept Nikki as a ‘senior’. She says that since Nikki is a part of the house, she is supposed to do some household chores just like her fellow contestants. A confident Nikki is seen filing her nails and saying, “This is impossible. Koi mujhse kaam karwake lega! Log bhi kya yaar! Mere se compare kar rahe hn apne aap ko (This is impossible. How can anyone think of making me work. They are comparing me to themselves).”

The viewers also agreed with Rubina about wanting Nikki to help in household work. For the record, only the seniors including Sidharth Shukla, Hina Khan and Gauahar Khan have been exempted form household duties.

Also read: Did Rajshree Thakur quit Shaadi Mubarak after a fight with the makers? TV actor clears the air

A Twitter user wrote, “This time Rubina is right. Confirmed or seniors me difference h but abki bar Salman sir ko bjani chahiye Nikki ki jayda over ho gaya ab iska (This time a complaint must be made to Salman, Nikki is going overboard).” Another said on Twitter, “#RubinaDilaik is right , tamboli confirmed contestant h , senior Nahi (Rubina is right, Tamboli is confirmed contestant but not a senior).” One more tweeted, “Nikki holiday par aayi hai Smiling face with open mouth and smiling eyes. Confirmed hui hai par usse lag raha hai woh senior ban gayi. #RubinaDilaik ‘s point is absolutely validOk hand Contestant hai toh kaam karna padega. Nikki Tamboli is loosing respect day by day. Aur yahi attitude uske against jayega. #BiggBoss14 (Nikki has come on a holiday. She has been confirmed but she thinks she has become a senior. If she is a contestant she has to work).”

Another promo shows a new task in progress, introduced by the Bigg Boss to enable contestants to take away all their personal belongings forever. It shows them collecting balls in their baskets and going all out to snatch the balls collected by their competitors in order to win.

10/15/2020 TV & Movies Comments Off on Bigg Boss 14: Rubina Dilaik warns Nikki Tamboli to not behave like a senior, she reacts ‘they are comparing themselves to me’
TV & Movies