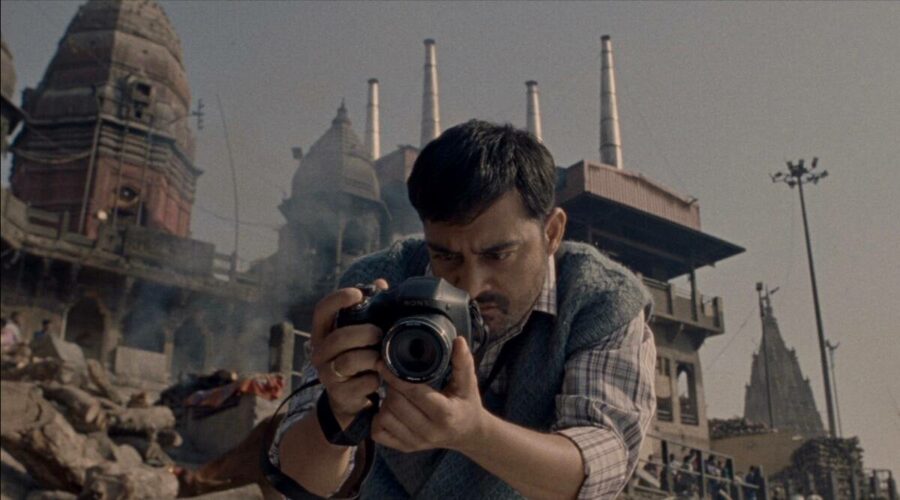 The movie Barah by Barah is a poignant look at the life in one of the oldest Indian cities as it undergoes seemingly imperceptible but steady changes. ONCE Gaurav Madan put aside the frustration over a film project — in which he had invested four years — falling through, the writer-director along with cinematographer Sunny Lahiri left for Varanasi. They reached the ancient city on February 12, 2019, in search of photographers, who capture the last images of the deceased brought to the Manikarnika ghat for cremation. Lahiri had met a couple of such photographers during a Varanasi trip earlier, and both of them were keen to explore the cinematic possibilities these unusual professionals held.

They checked into a rundown guesthouse near the ghat and dedicated the next three weeks roaming the city, scouting for locations, and, most importantly, developing the script of Barah by Barah. “It’s extremely difficult to write a film about a place like Varanasi sitting in the cacophonous discomfort of a Bombay home. The narrative started to take shape gradually during our Kashi stay,” says Madan. Though familiar with the life and culture of Kashi, it was the first time Madan soaked in its atmosphere as a ‘filmmaker’.

This time, however, Madan and Lahiri came across only one man, Indra Kumar Jha, who photographed dead people at the ghats, while other such photographers seemed to have opted for other ways of earning their livelihood. Jha too, they found, was deliberating on shifting to Dehradun to work with his brother-in-law. The transformation of Varanasi — cultural, structural and political — became the central theme of the movie. Driving the narrative of this changing holy town is the story of Barah by Barah’s protagonist, Sooraj (essayed by Gyanendra Tripathi), who is going through troubled times just like old Kashi, even as it is getting a modern makeover with flyovers and freeways. The photographer is out of work courtesy smartphones with cameras. But the movie looks beyond Sooraj’s struggles to chronicle how the city’s culture and ethos are undergoing a change.

“The film is the portrayal of a dilemma not just of a character but of an entire city undergoing a cosmetic facelift. The eternal question is – in an effort to embrace modernity and development, are we ready to let go of our past?,” says Madan. The film’s cast also features Geetika Vidya, Harish Khanna, Bhumika Dube and Aakash Sinha.

Since Varanasi is a much-explored location and subject in Indian cinema, did they feel the pressure of saying something new? Madan, by his own admission, was “quietly confident” of having a distinct voice. He also had faith in his protagonist — the photographer learning to cope with the changing ways of life. “It was an unspoken understanding between Sunny and me that we would not over-romanticise the ghats and old lanes of the city,” says Madan. They kept the process of writing “organic” as they regularly switched roles between being writers and technicians. “We carried out location scouting alongside writing the script,” says Madan, who has earlier assisted on movies such as Quick Gun Murugan (2009) and Barah Aana (2009). Though Madan and Lahiri had written two other scripts beforehand, Barah by Barah got made first.

While developing the script, Madan and Lahiri decided to shoot the film on celluloid. “It was purely an artistic call. The story we wanted to tell was of a death photographer struggling to make ends meet due to the advent of smartphones. Filming it on celluloid in a digital age seemed like a happy irony,” says Madan. The decision threw a set of “sweet challenges” and demanded “great discipline” from the crew. “We rehearsed a scene at least 10 times before a take,” says Lahiri, the cinematographer and co-writer.

Most of the scenes are long shots and thoughtfully framed. Lahiri believes framing a scene to be a part of the writing process. “The locations of the film lent themselves naturally as we were in Varanasi for writing the script. Our only struggle regarding the locations was that we had decided early on to shoot at real locations,” says Lahiri. Shooting in the old bustling city of Varanasi, especially Manikarnika ghat, where they wanted to film scenes not just montages, created logistical hiccups. That, however, didn’t deter the Barah by Barah team.

“The stupendous mystery and mysticism of the place draw artistes to ancient Kashi. That drew me as well. I call this place a ‘temporal paradise’. In Kashi, you can be young, old and non-existent at the same time. Thus the last chapter of our film is aptly titled Death, Life Etcetera!,” says Madan. The feature film’s script, divided in seven chapters, was written in less than 20 days and was ready by the end of February 2019. The shooting started on March 19 and was wrapped up within a month.

Its post-production, however, was delayed as the makers ran out of funds. Barah by Barah was screened during the International Film Festival of Kerala, 2021,under the ‘Indian Cinema Now’ competition category. Its next stop is the Pune International Film Festival, where the movie is a part of the World Competition section, likely to be held in April.