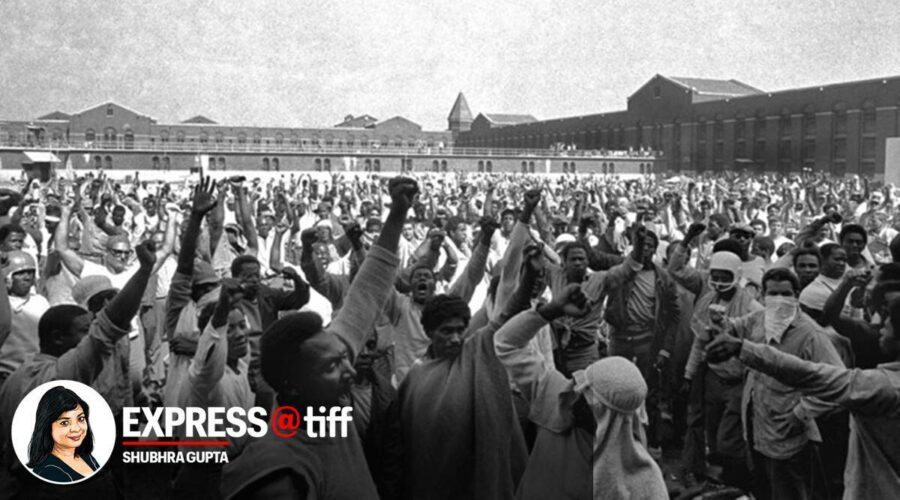 ‘Attica’ and ‘Hold Your Fire’ were amid films screened at the Toronto International Film Festival. The films feel even more vital and urgent today. The documentary section at the Toronto International Film Festival has always been strong. And this year, given that us accredited film critics in India are restricted to those films which aren’t geo-blocked, or those that are available only on the TIFF digital platform, it feels even stronger: both ‘Attica’ and ‘Hold Your Fire’ take us back in time to specific events in New York City; both are about how deep racism and visceral hatred of the other, coloured the responses of the people involved in those events, and how both films feel even more vital and urgent today.

A take-over by inmates of the Attica Correctional Facility in upstate New York is brought to life by digging into the memory reserves of inmates, TV reporters, and archival footage. On September 9, 1971, the prisoners spilled out into the open yard, dug trenches for latrines, fabricated make-shift tents to shelter from inclement weather, and waited for the authorities to listen to their demands. Five days later, after protracted negotiations that didn’t go anywhere, the police contingent reacted with shocking force. 43 prisoners died, and severe reprisals were enacted against those who survived.

Director Stanley Nelson chooses not to spell out initially what the inmates were militating against. It is in the brutality of the retaliation — naked prisoners are forced to crawl through dead bodies and faeces, lined up and hit by batons — that we see what the prisoners, primary Black men, had had to put up with. They were rebelling against inhuman conditions, rampant racism, food gone bad: as one of them says, ‘the only thing right was being White’. In the way it played out and ended, it was clear just how much of a gap there was between those who took part in the uprising, labelled as the worst after the Civil War, and those who were ordered to push back against it.

One of the most telling moments has President Nixon asking a top New York official whether ‘these’ are Black men he is dealing with? Another official describes an inmate as an ‘ugliest, Blackest Negro gentleman’. Attica became a byword for rebellion. When Al Pacino’s character in ‘Dog Day Afternoon’ yells, ‘Attica, Attica, Attica!’, you know exactly what he’s referring to: a breakdown of negotiations.

In 1973, four Black men tried to rob guns from a Brooklyn store. The situation rapidly went south, as expected. The robbers were not just Black, they were Muslims, and false news went around that they were part of the Black Liberation Army who had had a series of violent skirmishes with the law.

‘Hold Your Fire’ is powerful and thought-provoking. Looking back at those tense days and nights, leader of the foursome Shu’aib Raheem, 23 at the time, recalls how it was a ‘fool’s idea’, which resulted in the longest siege in the history of the New York Police Department (NYPD), and the killing of a police officer. In the film, we hear NYPD psychologist Harvey Schlossberg talking about the importance of this crucial aspect — holding fire — in any successful negotiation. But hearing the policemen who were present at the spot– the ugly racism, and the vituperative language — you realise how near-impossible it was for the cops, struggling with unresolved issues of ‘alcoholism, PTSD, and with a strong tendency towards suicide’, to look at the robbers with a base minimum of understanding, forget empathy.

Ordinary Black people were at the receiving end of violence from various quarters, and this quartet stepped into that store looking for weapons to defend themselves, not realising that guns can be the worst thing in the world when you are hoping to prevent bloodshed.

You see hordes of bystanders behind the police lines, shouting slogans. You see journalists on the job. Increasingly edgy cops are stationed strategically behind cars and pillars. And you are made aware of the confusion and the fear amongst both the robbers and the petrified hostages, including store owner Jerry Riccio who says, towards the end of his interview, that the four were ‘not bad men’.

In his introduction to the film, director Stefan Forbes hopes that his film will propel us to have ‘messy conversations’ about the lasting damage such hostility and mistrust can cause, and the healing that ‘deep listening’ can bring about.

09/13/2021 TV & Movies Comments Off on Attica and Hold Your Fire put focus on racism, visceral hate of the other: Express at TIFF
India