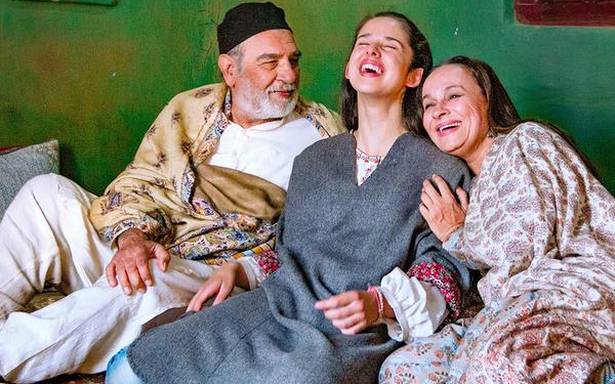 At the sidelines of the Habitat Film Festival 2019, award-winning filmmaker Ashvin Kumar talks about ‘No Fathers in Kashmir’ and his fond memories of Delhi

“The complexity of the conflict in the Valley goes beyond binary judgements like — right or wrong, national or anti-national. If there can be a solution then it has to be from the point of humanity, insaniyat. I wanted young people from here to meet the millenial from Kashmir and find a common ground,” says Ashvin Kumar, whose film No Fathers in Kashmir was screened on the opening day of the Habitat Film Festival at India Habitat Centre (IHC) in Delhi recently.

Ashvin’s film shows how the exuberance of first love can be problematic in the trouble-torn Valley, where so many little ones have lost their fathers. His other films Inshallah, Football and Inshallah, Kashmir were also about the suffering of ordinary Kashmiris who long to move on with their lives. In Inshallah, Football, Ashvin shows an aspiring footballer being denied the right to travel abroad just because his father is suspected of being a militant. “Kashmir is the only place where nostalgia and deep neglect exist at the same time,” declares the 46-year-old filmmaker. “There is a palpable sense of beauty as well as dismay. So the idea was to capture both in one frame,” he explains.

He says his love for Kashmir was nurtured when he visited his maternal granddad who lived there. Those memories are permanently etched in his mind, he adds. Ashvin came into prominence in 2005, when his film Little Terrorist got nominated for Best Live Action Short at 77th Annual Academy Awards that year.

During the screening at the IHC, at the 14th edition of the Festival for Indian cinema, Ashvin lauded the space for its courageous act of screening the film on its opening day. The film had run into rough weather last month when it had to be pulled out from theatres. No Fathers in Kashmir is a love story between two 16-year-olds. “The intent was to get young people, who are my target audience, to look at the Valley from a different point of view, which I call ‘a crisis of compassion’,” explains Ashvin.

Studying in Delhi as he did at Modern School and later St Stephen’s College, he hasbeautiful memories of Delhi and its open roads, he says. “I stayed at Malviya Nagar; where perhaps one scooter would whiz past every one hour or so! In the 1990s, the city had vast tracts of jungle.” He is sad that the city has undergone a sea change with malls in places where there were open spaces.

Other films of interest at the fest:

“Landing at the Delhi airport, I saw mountains of garbage. This is sad. But what I do like in this city is that both heritage and the humdrum contemporary life co-exist. One can still see this in Shapur Jat, Hauz Khas and Mehrauli. It was at St Stephens College as part of the Shakespeare Society that Ashvin feels his theatre skills were honed. “I played Don Armado in Love’s Labour’s Lost. I also played Indrajit in Badal Sarkar’s play Evam Indrajit. But things really changed for me at a month-long workshop conducted by Barry John. Before that my experience of theatre was very British.”

When asked what he thought of Bollywood stars getting involved in political campaigning, he says, “I don’t think many actors know the ideologies of the parties they support. If they tweet, lakhs of people get influenced. However, there are exceptions. Swara Bhaskar and Javed Akhtar went to Begusarai to campaign for Kanhaiya Kumar of the JNU.”