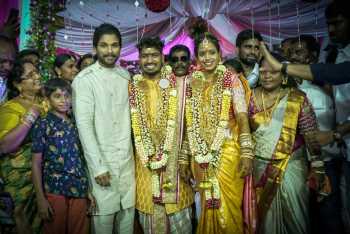 Whether it is visiting an ailing fan or helping out someone from his team, stylish star Allu Arjun does it in style. And today, as he appeared at the wedding of an assistant choreographer in Tollywood named Sirish, many got stunned.

Apparently, this guy Sirish has joined as an ‘office boy’ Geetha Arts a couple of years back. But he has a huge interest in dance and one fine day Bunny is said to have noticed few of his dance moves. Later the mega hero got him enrolled in dance classes and now Sirish is working as an assistant to a noted choreographer.

On the eve of Sirish’s marriage, Bunny who has recently returned from his European voyage has taken time to make his presence felt. All the family members of Sirish and other guests at the wedding are beaming smiles with the arrival of their favourite.

Time and again, Allu Arjun is making sure he never misses important events in the lives of people close to him and people who are associated to his coterie.