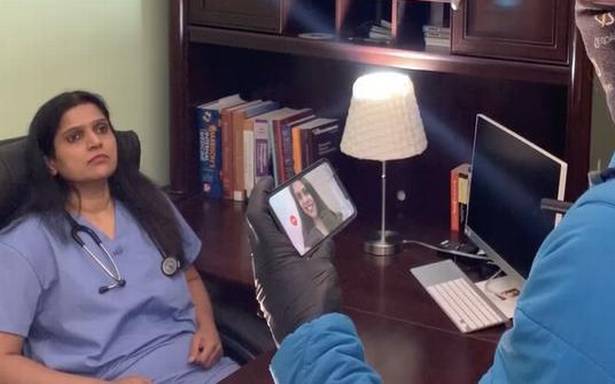 Filmmaker Sweta Rai’s documentary ‘A Pandemic: Away from the Motherland’ aims to take audiences on a journey of empathy for the doctors who are on the coronavirus frontline

The Los Angeles-based filmmaker Sweta Rai, from Madhya Pradesh, has three Masters degrees but nothing prepared her for the trials and tribulations of pulling together an emotive documentary on the millions of doctors risking their lives to save others.

In a Skype interview with MetroPlus, Sweta does not just talk about the logistical challenges, but also the emotional weight of pulling off such a project.

The documentary follows the personal lives of five Indian doctors who are on the frontline of the COVID-19 battle. One of them is Sweta’s friend, Dr Ankit Bharat, chief of thoracic surgery and surgical director of Northwestern’s lung transplant programme, who recently made headlines for performing the United States’ first double-lung transplant surgery on a COVID-19 patient.

Sweta wanted to go deeper into what these doctors — the other four being Dr Pooja Malhotra (nephrologist), who contracted COVID-19, recovered, and got back to work; and Dr Uma Madhusudana (internal medicine), Dr Shreedhar Kulkarni (internal medicine), and Dr Shantanu Singh (critical care and pulmonary diseases) — go through each day, risking their lives and wondering when they would next be able to see their family.

‘A journey of empathy’

“I wanted to start a conversation of empathy,” she says. “I focussed on the doctors’ journeys. Two of them have parents back in India who worry about them greatly.”

At the time of writing this, the United States has 2.43 million confirmed cases out of the global 9.39 million. “These stories, especially those of the frontline workers, have to come out because they do not see their families. We also interviewed their families in India and got to know that the struggle is the same everywhere because we are united by a common cause.”

While on the topic of empathy — in a time of physical distancing — Sweta explains she has learned a lot. “In the beginning, when the first cases came up, no one knew what this was. This is addressed heavily in the documentary as we have been filming for three months. Plus, the shortages of masks and PPE and gowns happened. And we lost a lot of Indian doctors to COVID-19. In fact, I was supposed to interview someone in the United Kingdom but, sadly, before we could, we lost him.,” she says.

Sweta adds that support for Indian doctors is widespread. “Dr Madhusudana, who received a ‘Drive of Honour’ where several police vehicles, fire brigade trucks and private cars passed her home in Connecticut, said it completely changed her mood. Before she was feeling so down.”

Was it difficult to get the doctors to share their fear and exhaustion? Yes, responds Sweta, who infers that trust was paramount to the storytelling.

She adds, “It took a while to reach a point of that intimacy. They would break down after particularly stressful points, and we would go back and forth on a lot of what they were able to share. Plus, getting permission from hospitals for doctors to speak to us was not easy; but given our focus is on the doctors themselves, it worked out, thankfully.”

The filmmaker reveals that there is a special moment in the documentary when Dr Malhotra finally tests negative for COVID-19 on Mothers’ Day, which she is looking forward to share with audiences.

How the filming set-up with Dr Um Madhusudana works

Sweta and her team had to remotely coach the doctors to film themselves, too. “My cinematographer, David Bouza, who has shot 60 Hollywood documentaries so far, and I came up with the idea of guiding the doctors about a mobile app for shooting professional videos. Dr Kulkarni and Dr Singh became pros at the app and self-taped their interviews while I directed them through Skype, Zoom, and WhatsApp. I shot in different US cities, and also shot in the smallest towns of India, all remotely under lockdown.”

That said, one cannot expect the cinematography through the film to be uniform, agrees Sweta. But she says that is the beauty of it. The documentary is supposed to be personal to these doctors while representing the efforts of the medical community.

The film is currently in its final stages of editing and as she looks back, Sweta says she and her team are grateful for the experience. “Though Dr Bharat and I have been friends for a while, I did not know this side of him. The minute they step into the hospitals and put on their masks and PPE, they become these heroes.”