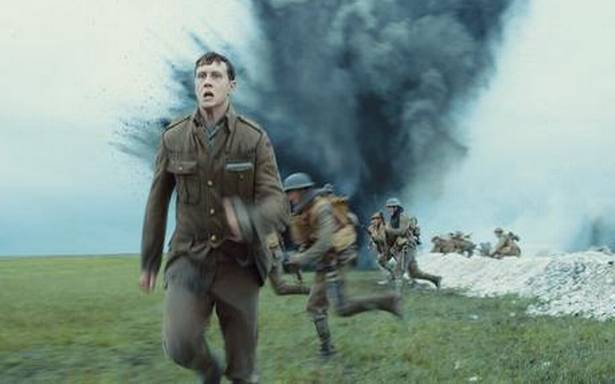 If there is one image from Sam Mendes’ 1917 that has lingered on, it’s that of the trenches. Narrow, winding, unified, alike, never-ending, stretching way till the horizon. Like the interminable war itself and the eternal human misery that comes in its wake. They are the hideouts, refuge and resting grounds as well as spaces for conflicts and attacks; proxy homes for the soldiers but suffocating in the way homes should never be.

Roger Deakins’ camera moves and leaps through these constricting furrows with an urgency that speaks as much for the monumental endeavour when it comes to the craft behind making 1917, as for the key that the film pivots on: a message that needs to be delivered with uncommon alacrity by two soldiers wading past many more of their kin crowding out the foxholes.

Sam Mendes comes to the point fast in the film that is based partly an an account he heard from his grandfather. The year is 1917, it’s World War I, the Germans have pulled back from a sector on the Western Front in France and the British have planned an attack on the retreating Germans. But aerial intelligence has it that it’s a sly, tactical move on part of the Germans to eventually attack the British with artillery. The telephone lines are cut and there is no other way left for General Erinmore (Colin Firth) but to have two young soldiers, Blake (Dean-Charles Chapman) and Schofield (George MacKay), hand-deliver the message to Colonel MacKenzie (Benedict Cumberbatch) of the second battalion of the Devonshire Regiment to call off the attack that would cost lives of 1600 soldiers, including Blake’s own brother Joseph (Richard Madden).

As the two cross the no man’s land, more trenches follow. The German ones now, collapsing, dotted with tripwires, filled with the stench of dead horses and human bodies. It’s a surreal, stark, utterly depressing and devastating wasteland of a landscape within which the film situates itself. The lost human touch is visible in the abandoned homes and farmhouses, rendered mere structures without any sign of life inside. The throbbing of a heart, if there is one, lies deeply concealed, like a young French woman in hiding with an infant whose parents she knows nothing about.

The film dazzles at each step, one encounter and adventure after another shot like a set piece, complete in itself with MacKay’s stoic presence adding to the pathos and poignancy. He lives the film’s adage: “He travels the fastest, who travels alone”. Much has been and will be written about the long takes that make the entire film appear like one continuous shot. Or the climactic sprint of Schofield across the battlefield as the charging British infantry is bombarded by the German artillery.

But the most haunting and heartbreaking sequence remains the one in which Schofield eventually reaches the Devonshires through the agency of a song, heard faintly from a distance, and gradually growing audible, clearer and sharper, enveloping in its sheer poetry, but also smothering us with the underlying pain and weariness of the soldiers. Wayfaring Stranger plumbs the depths of melancholia, especially in one simple, seering line, “I’m just going over home”.

True to the spirit of the song, as we move along in 1917, invested and also on the edge of our seats, it becomes a human journey than just a soldier’s mission. It’s about doggedness and bravery, forgiveness and treachery and faith and continuities in the long road to survival. It all boils down to a familiar narrative, oft-stated but perhaps always in need to be expressed more and more: the loss of young lives, families torn asunder and those waiting in anxiety and hope and the overwhelming longing for home. Home where there is the Christmas turkey, the chicken dinner, the new-born puppies and the cherry blossoms in the orchard, all waiting for you. Eventually any good war film can’t be about anything but the futility of war.