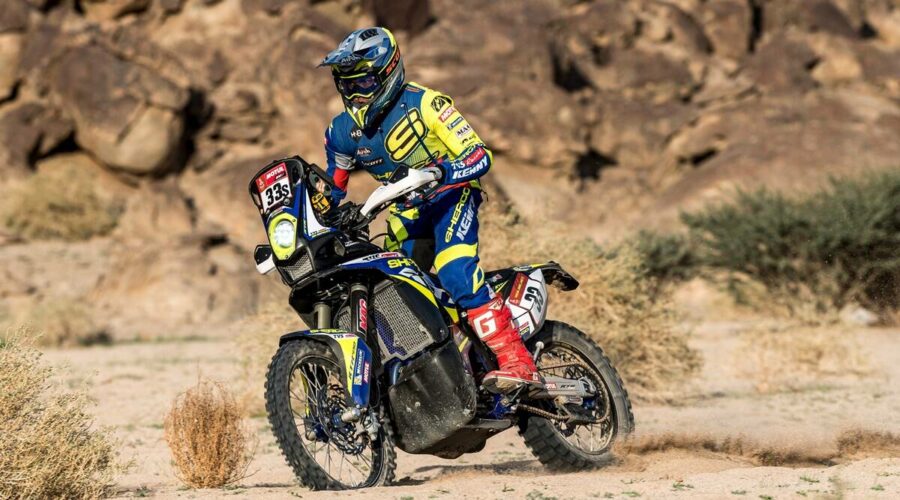 A lot has changed in the last 12 years. Once the worst among the beginners is among the best in the world now. Excited on getting a bike for his 16th birthday, Harith Noah, on a lark, had entered a local amateur race for beginners in the paddy fields close to his home in Shornur, a town in Kerala’s Palakkad district. He would finish last.

Now 28, Noah is back with his bike on the same patch of land on the banks of the river Bharathappuzha, planning to negotiate slippery sandy terrain. A lot has changed in the last 12 years. Once the worst among the beginners is among the best in the world now.

Last month, he completed the Dakar Rally in Saudi Arabia, a feat so arduous that bikers compare it to scaling Mt Everest. He rode more than 7,500 kilometres, in less than a fortnight over sand dunes, rocky roads and valleys for nearly 55 hours for a 20th-place finish, the best by an Indian.

Happy happenstances have defined the life of this accidental biker. Years back, his German mother, Susanne KV, had landed at Kalamandalam in Cheruthuruthy to learn Carnatic music. One fine day, she would step out to buy bread. In a coincidence mostly seen in rom-coms, she would meet her soulmate, baker Mohammad Rafi KV. The two would get married and settle in Germany.

“My father owns a bakery in Shornur town. My parents met for the first time when my mother visited the bakery opposite the bus stand for a loaf of bread. They moved to Germany for a while but we returned to Kerala when I was about two years old,” says Noah, who is looking forward to riding along the banks of the river behind his home since he fully recovered from surgery needed to remove a metal plate that had been holding his fractured collarbone.

In contrast to the rough and tumble of Noah’s life in the fast lane, his parents inhabit an idyllic world. “My mother is a painter and also a farmer. She takes care of cows, the paddy fields, banana and coconut plantations and vegetables. We don’t sell them. It is for us and the people who work on the farm,” Noah says.

If not for the roar of the bike engines he heard as a teenager, the daredevil would have settled for a less adventurous life. “When my father gifted me a bike, I still didn’t know how to ride well. I was studying in a boarding school in Kodaikanal. I was down for the holidays. I could hear the sound of bikes in a paddy field nearby. Bikers were training for a race. They asked me if I wanted to ride. I said ‘ok’. Next week, I entered in the ‘beginners class’ at a race held over paddy fields and finished last.”

His journey from the backwaters to the Dakar has seen him risk life and limb.

Before making a name at the Dakar this year, Noah, a TVS Racing rider, won seven supercross national championships. In his first attempt at the Dakar last year, he had to retire during the third stage. This year, there was a setback when TVS Racing decided not to participate in the Dakar. The racing arm of the Indian manufacturer, however, sponsored him as a privateer with the Sherco Rally Factory team.

He has lost count of the number of times he crashed or tipped over the Sherco TVS RTR 450 rally motorcycle over the two editions of the Dakar.

Last year, he rode with a swollen left eye after a crash. This year, during Stage 4, full of high-speed corners, he hit a rock and busted his rear fuel tank. He continued to ride with a torn quadricep muscle and a sore knee. When he ran out of fuel, he borrowed some from other riders, to complete the stage.

He lost his way in Stage 11 and went round and round mountains before spotting local camel-herders. Thankfully for him, they pointed in the direction other participants went.

“I think in the Dakar, you need the skills, fitness, mental toughness and navigational skills. It is about the days where you have to get up early and some days ride for 200 kilometres,” he says.

But after the back-breaking hours on the two-wheeler negotiating deadly curves, Noah looks forward to his parents and comfort zone.

“After the Dakar, you start to appreciate life much more. Even things like a soft bed to sleep on and sleeping as long as I want.”

02/14/2021 Sport Comments Off on Worst in class, Harith Noah now one of the best riders in the world
TV & Movies