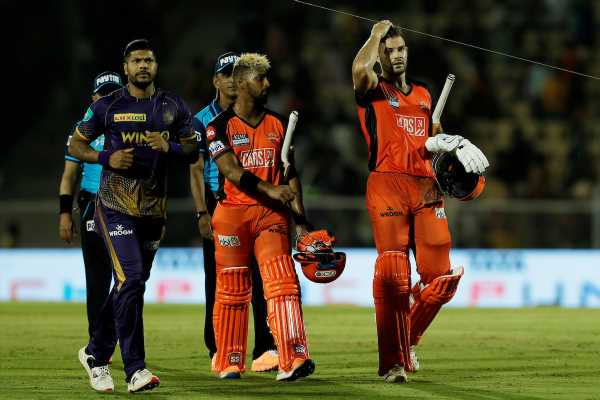 SunRisers Hyderabad captain Kane Williamson was all praise for the all-round performance of team after the seven-wicket victory over Kolkata Knight Riders in the Indian Premier League match, at the Brabourne Stadium in Mumbai, on Friday.

The 2016 champions won the toss, elected to bowl first and saw their pacers respond splendidly, picking up three wickets in the first six overs.

T Natarajan was the pick of the Hyderabad bowlers, with figures of 3 for 37, while Umran Malik claimed 2 for 27 as the Knight Riders were restricted to 175 for 8.

In reply, Rahul Tripathi came up with a blistering 71 off 37 balls and Aiden Markram scored an unbeaten 68 off 36 as the SunRisers cruised home in just 17.3 overs, finishing with 176 for 3.

“It was a step up. With the ball to take early wickets against Kolkata, who keep coming at us, helped us.

“Our death bowling was superb. To go out there and chase it with Rahul and Markram playing so well.

“All in all, a fantastic performance,” said Williamson after registering their third victory in five matches.

The SunRisers owe their success to Proteas cricketers Marco Jansen and Markram. Both delivered for the team. Jansen struck in the second over itself, dismissing KKR opener Aaron Finch in the second over and finished with figures of 1 for 26 in his four overs.

“Both Jansen and Markram are big players for us. Marco, with his bouncers, and with the new ball is key.

“Umran is unique that he touches the 150 mark. He goes for four on many occasions, which is not ideal, but he is always looking to improve.

“There are little things to improve on. The guys are working hard and it’s good to see the improvement,” added Williamson.

They next face Punjab Kings on Sunday.