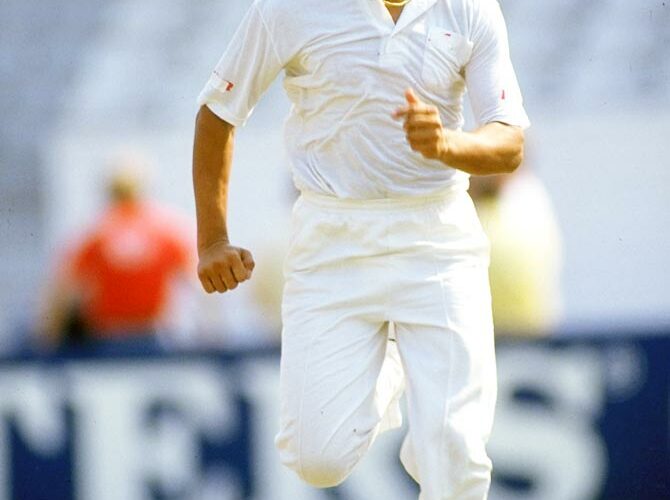 ‘I felt Test cricket is just beyond my reach.’
‘And slowly, slowly, I started doing well.’
‘In the second Test against Pakistan, I scored a fifty and when we went to Sialkot I played a series-saving innings, which was a game changer for me.’
‘At that stage that was the most important innings of my life.’ Your special knocks in Sharjah 22 years ago have been trending on social media.
You scored a brilliant 143 against Australia to help India qualify for the final and then stroked a magnificent 134 in the final on your birthday against the Aussies to win the title for India.
These two knocks are considered by many as two of the best knocks in limited overs cricket considering the quality of the opposition and also the importance of the two games.
Can you take us through the two special knocks once again on your birthday?

Those two knocks came at a critical stage. One was for us to qualify for the final and the other was to beat Australia in the final, so it couldn’t have come at a better time.

Though I have to be honest that the Sand Storm match was something that I have never experienced like that in my life before.

When I saw the sand storm approaching, my first thought was that I am going to get blown away with it, I’m going to get sucked into it and it will just pull me up.

So I was all set to hug Adam Gilchrist, who was next to me, so that with at least two people’s weight it will require a lot of force.

I was all ready to hold onto Gilchrist, but then the umpires took the call of taking us back to the dressing room and then there was a revised target.

Then suddenly those overs are deducted and not enough runs are taken away, then your required run rate rockets up.

And in those days when T20 was not played, or for that matter, even the rules were a different, the laws were different.

You played with only one ball, not with two new balls so when you are playing with one ball, the ball gets discoloured, it starts reversing, it becomes softer.

When there are two new balls, there is no reverse swing. I have not seen reverse swing for a long time in One-Day Internationals.

So all these elements were there. There was no T20 cricket then, so when the required run rate went up to six-and-a-half or seven it was considered really, really, high and almost beyond reach.

The game has now evolved, the game has changed, and so has the laws of the game, so everything has completely changed unlike back then. That is why I think those two Sharjah innings stay really important.

Another important knock for you was in your first series when you travelled to Pakistan as a 16 year old in 1989.
You immediately gave proof of your immense potential when you scored a majestic 57 against Pakistan in the fourth Test in Sialkot against a lethal pace attack comprising of Wasim Akram, Waqar Younis and Imran Khan.
You were hit on the nose by a bouncer from Waqar and left with a bleeding nose, but carried on to bat as if nothing happened and came up with a cracking innings.
As a young boy, playing for the first time for the country, what was going in your mind?
How tough was it against the Pakistan pace attack?

I just wanted to be on that tour.

All I wanted to do was wear that India cap and be part of the Indian cricket team.

So that exposure completely changed my thought process. I felt that this was going to be my first and last game because I felt Test cricket is just beyond my reach.

In the second Test match I scored a fifty and when we went to Sialkot I played a match-saving innings,

I would much rather say series-saving innings because Navjot Singh Sidhu and I had that big partnership and saved that match as well as the series, which was a game changer for me.

At that stage that was the most important innings of my life.

Who was the toughest bowler you faced and the batsman you enjoyed watching the most during your playing days?

There were so many bowlers. I have played against the top five leading all-rounders, whom I watched on television and I adored them.

Then I played against Malcolm Marshall in Australia, Ian Botham also there. So these five all-rounders of that era.

Later on, Wasim Akram and all these guys came. These five all-rounders from that era I was quite fortunate to play with.

To actually look at the best bowlers and the best batsmen, it is a long, long list. How do I name them if I start?

How do you differentiate between Wasim and Waqar or Imran or Richard Hadlee or Malcolm Marshall or Ian Bishop or Curtley Ambrose or Courtney Walsh?

So many guys, you had Allan Donald, Shaun Pollock, it is a long list. You also have Shane Warne, Glenn McGrath, Brett Lee, Jason Gillespie, Muttiah Muralitharan, Daniel Vettori.

There are so many names, it is difficult to pick one from among the bowlers.

In batting, I can say Brian Lara was one, Ricky Ponting was another one, Steve Waugh was a tough nut, then you had Matthew Hayden, Adam Gilchrist was an entertainer, Jacques Kallis was as solid as anyone.

There are so many names. I know I am forgetting at least another 15, 20 names for sure.