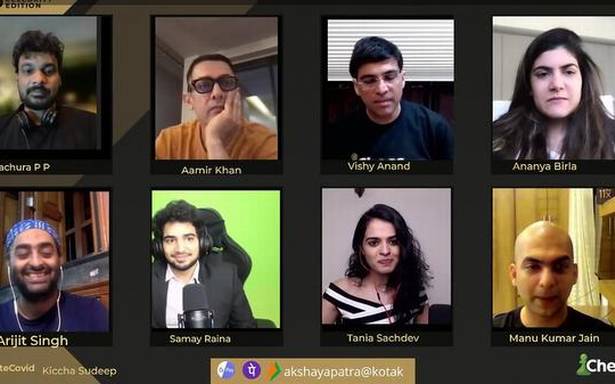 More than ₹6.7 lakh collected in COVID-19 fund-raiser featuring Anand and a line-up of celebrities

Viswanathan Anand could have waited for his opponent, Nikhil Kamath, to lose on time, though from a completely winning position. But, the genial genius from Chennai didn’t. He resigned, though his rival had only seconds left.

That was one of the memorable moments from a unique COVID-19 fund-raiser event on Sunday featuring Anand and an impressive line-up of celebrities from cinema, cricket, music and business. The event conducted by chess.com raised more than ₹6.7 lakh, most of which will go to Akshayapatra Foundation.

Nikhil’s victory was indeed very much the talking point. The founder of Zerodha, India’s largest retail stockbroker, used to play chess in his school days.

He wasn’t the only one that managed to trouble Anand, though. Bollywood producer Sajid Nadiadwala played some solid chess before erring in a rook ending.

Kannada actor Sudeep also came up with some fine moves. Anand did win those games, though. He had it easier against Indian cricketer Yuzvendra Chahal, much easier than he would have hoped, as the wrist-spinner is a former National age-group champion.

Superstar Aamir Khan put up a good fight, despite getting into an inferior position early on. After his loss, Aamir regaled the viewers with anecdotes about his encounters with chess players, including a little girl who thrashed him during the shoot of his movie Lagaan.

The programme ended with Arijit singing one of his hits, Ae dil hai mushkil…

06/13/2021 Sport Comments Off on When chess met cricket, cinema, music and business
India