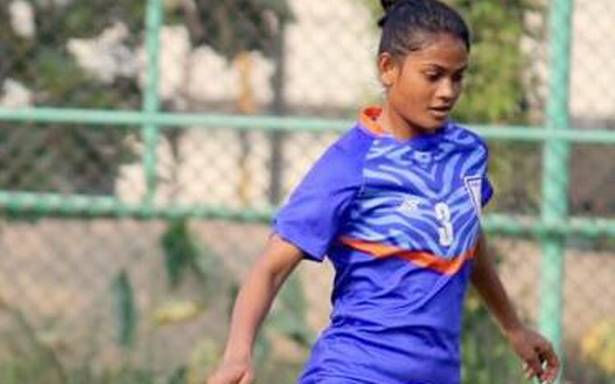 Defender Manisa Panna from Odisha has had a tough life, losing her parents at a young age and moving away from her favourite sport before fighting her way back with help from her grandmother to represent India in the AFC women’s Asian Cup.

“It has not been an easy journey by any means. I’ve even had to stop playing football in my younger days. But I couldn’t stay away from it for too long. I just wanted to do something,” Manisa told the national federation’s website.

The continental tournament is scheduled to be held from January 20 to February 6 in Mahatashtra.

While football has helped Manisa overcome the terrible losses in her life, she has not always had the support of her neighbours in her endeavours.

“In the beginning, there was a mixed reaction from my neighbours and relatives, about me playing football.

It was at this stage, that her grandmother and aunt came in to fully support her in her footballing journey.

“They never discouraged me from playing football. They told me to pursue whatever avenue interested me the most, and told me that they would always have my back, no matter what.” Then, she started getting call-ups for the junior National teams — India U-17 and India U-19. She eventually broke into the senior team in 2015.

“Once I started getting opportunities in the national teams, people started seeing my name in the papers, and those in our village would come and tell me that I’ve made our village proud, and that felt very good.

“My grandmother is a very big inspiration. She always used to keep herself busy, just to be able to feed us three times a day. She was determined to take good care of us and ensure that we get the support to reach a certain level from where we could take care of ourselves,” the 30-year-old said.

One of the highlights of Manisa’s career has been winning the 2016 SAFF championship title.

“We are all preparing really hard for the AFC Women’s Asian Cup. It’s a special occasion because India will be hosting it, and the squad has a lot of belief in itself.

“We have a strong group to play against. Iran are a good side, and we have played against Chinese Taipei recently in a friendly (India won 1-0), which was a tough game for us.

“And then, of course, there’s China, who are one of the best in Asia.

“We have confidence in our abilities. If we make the quarterfinals, we stand a chance of qualifying for the World Cup. That remains the long term goal as of now,” said Manisa.

01/06/2022 Sport Comments Off on We have confidence in our abilities: Manisa Panna ahead of AFC women’s Asian Cup
India