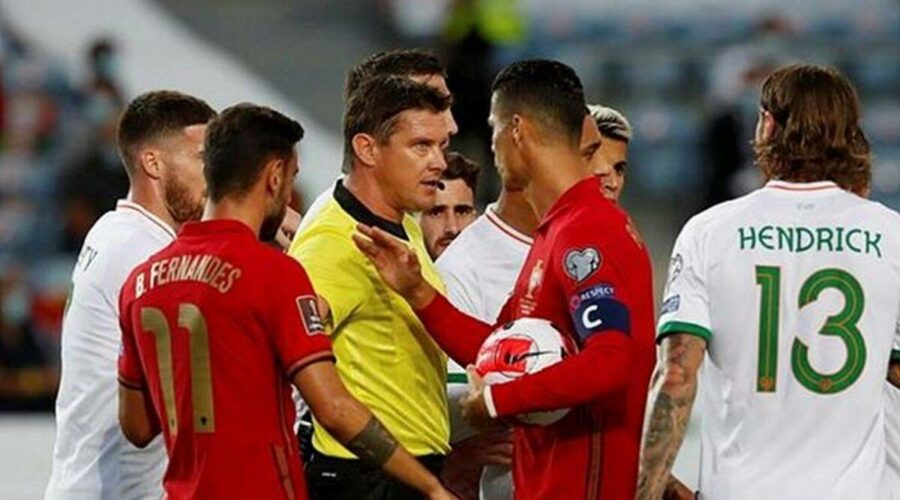 The incident, however, was not reviewed by the VAR and Ronaldo was allowed to take the kick which was saved by teenage goalkeeper Gavin Bazunu. It has been a whirlwind week for Cristiano Ronaldo with him finally becoming a Manchester United player on deadline day after a virtual tug-of-war between Manchester City and the Red Devils for his signature.

But as they say, wherever Ronaldo goes, a little bit of drama follows. On a day where he broke the men’s international scoring record in a World Cup qualifier against Ireland, the Portuguese maestro was in the centre of controversy again as he escaped a potential red card after he appeared to take a swipe at Irish player Dara O’Shea.

In the 10th minute of the game in Faro, Ronaldo’s Portugal teammate Bruno Fernandes went down under contact from Jeff Hendrick, after Ireland misplaced a pass in their own penalty area.

There was a lengthy VAR check on the penalty and it was given. As Ronaldo was preparing to take the spot kick, West Brom man O’Shea rolled the ball away from the spot and the Portuguese striker appeared to punch O’Shea’s arm. The incident, however, was not reviewed by the VAR and Ronaldo was allowed to take the kick which was saved by teenage goalkeeper Gavin Bazunu.

A lot of fans were unhappy with the decision and they took on Twitter to vent out their frustrations and wondered how Ronaldo ended up without a red card.

The Portuguese superstar would ultimately end the night on a high after scoring 2 late goals to hand Portugal a 2-1 victory as well as breaking the men’s international scoring record.

09/02/2021 Sport Comments Off on Watch: Ronaldo escapes red as he appears to punch Irish player before taking a spot kick
India