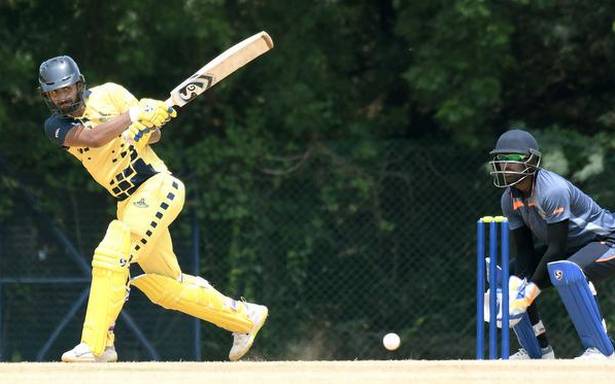 Riding on N. Jagagadeesan’s century (102, 101b, 9×4, 1×6) and Shahrukh Khan’s sensational power-hitting at the end (79 n.o., 39b, 7×4,4 x6), Tamil Nadu for the second time in the tournament dominated arch-rivals Karnataka with a crushing 151-run win in the quarterfinals of the Vijay Hazare Trophy here on Tuesday.

In helpful conditions, Karnataka got an early breakthrough removing B. Aparajith. But Jagadeesan and R. Sai Kishore, who was promoted to number three to negotiate the tough phase, played with authority against the pacers with solid technique underpinning their strokeplay.

After the first ten overs, Jagadeesan played some beautiful shots through the off-side, driving and punching off the backfoot.

At the other end, Sai Kishore lofted left-arm pacer Prateek Jain with confidence for a six before doing the same to Dubey later as they both got to half-centuries at a brisk rate.

After Sai Kishore’s dismissal, the experienced Dinesh Karthik chipped in with a valuable cameo of 44 off just 37 balls with two sixes and a boundary off Jain in the 34th over being the highlight.

Karnataka slowly fought back with their spinners K.C. Cariappa and Dubey (3/67) with quick wickets to have TN at 252/5 in the 41st over. That was when Shahrukh walked in and took the game away from the opponents.

TN lost three wickets off Prasidh Krishna’s 46th over to go from 290/5 to 290/8. With just Silambarasan for company, Shahrukh launched into the pacers Krishna and Vyshak plundering 59 runs in the last four overs as the duo added 64 for the ninth-wicket stand.

The youngster hit cleanly down the ground over the ropes and was able to pull and flick through the leg-side over the fence stylishly to help TN finish strongly.

In reply, Karnataka was never in the chase despite a few decent partnerships, as the steep asking rate meant they needed to take chances and the TN bowlers were able to pick wickets regularly.