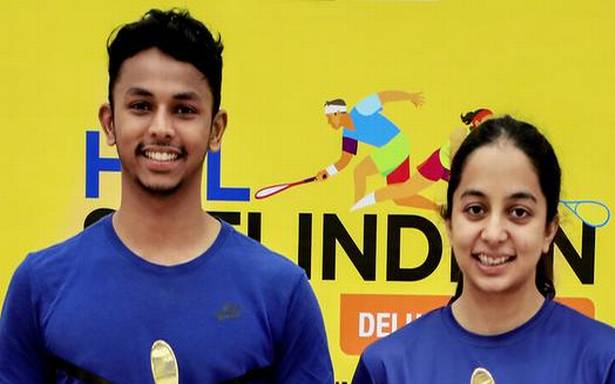 The champions earned their titles with similar scorelines

Velavan Senthilkumar and Tanvi Khanna won once again, asserting their supremacy in undisputed terms, in the HCL PSA Challenger squash tournament at the Shiv Nadar University on Tuesday.

Second seed Tanvi Khanna limped towards the end but executed an 11-7, 11-6, 11-9 victory over the top seed Sunayna Kuruvilla in the women’s final.

Interestingly, Tanvi had beaten Sunayna 15-13 in the fifth game in the last final in Chennai. Tanvi capitalised on the two events at home after the pandemic to accumulate useful world ranking points.

“It has been absolutely amazing playing two challenger events. This was yet another crucial match against Sunayna and I thoroughly enjoyed playing against her at this stage,” said Tanvi.

In the men’s final, third seed Velavan was equally assertive in taming the fourth seed Abhishek Pradhan, who had ousted the top seed in the semifinals.

Velavan had a similar scoreline, winning 11-7, 11-6, 11-9, for his second triumph in the current series. He did not drop a game in the tournament and was a notch above the rest.

At the presentation, Rajat Chandolia, Marketing Head of HCL, said that the organisation was committed “to improving the squash ecosystem in the country and will continue work with SRFI to design and implement efforts in that direction.”

The secretary general of the Squash Rackets Federation of India (SRFI) praised the Shiv Nadar University for being a “great host and providing an amazing squash venue.”