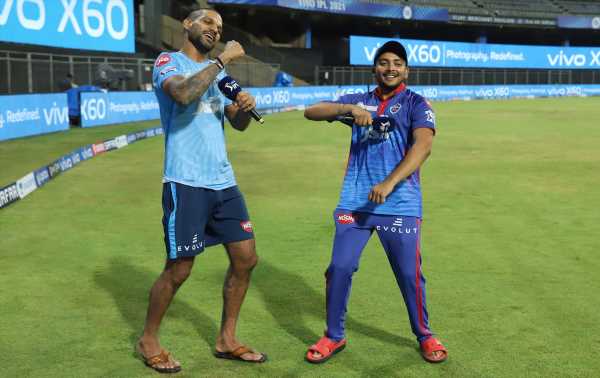 Delhi Capitals have gone from strength to strength in the last couple of years in the IPL.

This season too, they look like the team to beat after their convincing seven wicket victory over the Chennai Super Kings in their opening match of IPL 2021 in Mumbai on Saturday.

Even though CSK ran away with a healthy total 188 for seven in their 20 overs, Delhi Capitals were hardly flustered.

The evening belonged to Delhi Capitals openers as Prithvi Shaw continued his recent good with the bat, while veteran Shikhar Dhawan showed he still has it in him to excel on the world stage.

The duo got the ball rolling with a boundary each in the opening over bowled by Deepak Chahar, and there was no looking back from that stage onwards.

Their attacking approach deflated CSK’s bowlers in the Powerplay overs. Sam Curran was hit for two sixes and a four in his second over before Shardul Thakur was slammed for four fours in his opening over.

Shaw got a couple of lifelines as substitute Mitchell Santer (long-off) and Ruturaj Gaikwad (deep midwicket) put down a couple of sharp chances.

Shaw made them pay dearly for those lapses as he pulled Moeen Ali for a four to race to his fifty, from just 27 balls.

At the halfway stage, Delhi Capitals looked to have taken complete control as they raced to 99 for no loss in 10 overs.

Dhawan got to his fifty from 35 balls in the very next over as the duo continued to deal in boundaries in the middle overs.

Shaw looked unstoppable till he played a careless shot off Moeen, to be caught at sweeper cover, after a splendid 72 from 38 balls, laced with nine fours and three sixes.

Delhi’s openers put on a decisive opening stand of 138 runs from just 81 balls, completely exposing the lack of depth in the CSK bowling.

Dhawan continued to attack the bowlers after Shaw’s dismissal, ensuring that Delhi never lost the momentum.

He hit Thakur for successive fours in the 17th over before he was trapped leg before in the same over after a brilliant 85 from 54 balls, having hit 10 fours and two sixes.

It was a match CSK would like to forget soon as they look to bounce after their horror showing last year, while Delhi Capitals would look to carry forward the momentum.