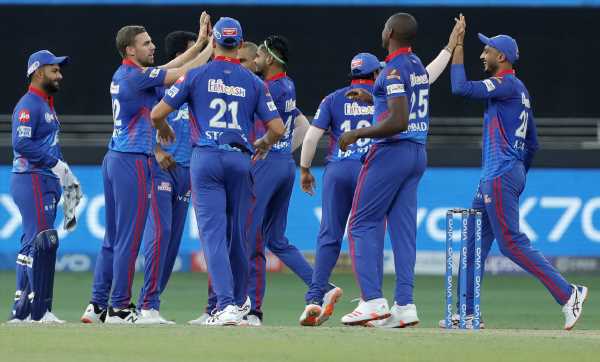 It was a clinical performance by Delhi Capitals with ball and bat as they outclassed Sunrisers Hyderabad by eight wickets to jump to the top of the IPL standings.

The Delhi bowling attack was too hot to handle for the inconsistent Sunrisers Hyderabad’s batting line-up and 134/9 in their 20 overs, on a good wicket was all SRH could put up.

The South African pace duo of Anrich Nortje and Kagiso Rabada, who together accounted for 52 wickets last year, showed their prowess with the ball yet again.

With Avesh Khan as the third seamer, along with the spin duo of Ravichandran Ashwin and Axar Patel, last season’s runners-up Delhi look like they have the bowling attack to go all the way this year.

Nortje gave the Sunrisers the perfect start when he dismissed the dangerous David Warner in the first over for a duck. Rabada sent back the other opener, Wriddhiman Saha, for 18.

Axar made it worse for Sunrisers when he had their captain, Kane Williamson, caught at long-off after a struggling innings of 18 from 26 balls.

The experienced duo of Manish Pandey and Kedar Jadhav failed to deliver under pressure as both perished to Rabada and Nortje respectively.

Abdul Samad (28 from 21 balls) and Rashid Khan (22 from 19 balls) added some respectability to the total with a few boundaries in the last few overs but the total proved to be well below par.

It proved to be an easy run chase for Delhi’s batting led by veteran Shikhar Dhawan, who stroked 42 from 37 balls, to prove a point to the Indian selectors who ignored him for the T20 World Cup.

Shreyas Iyer, back in the team after a long injury lay-off, got back among the runs with a fluent 47, while Rishabh Pant ensured there was no late drama with a quickfire 35.