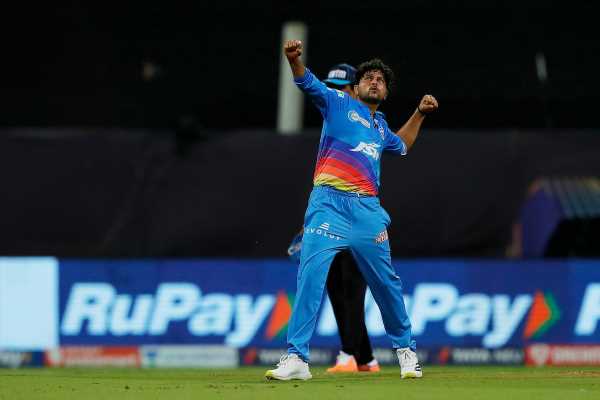 When Delhi Capitals won the toss and invited the Kolkata Knight Riders to bat at the Wankhede stadium in Mumbai on Thursday, April 28, 2022, Captain Rishabh Pant would have expected his bowlers to give him the early advantage in the Powerplay overs.

DC debutant Chetan Sakariya got the first breakthrough, taking out Aaron Finch for 3 and soon after, Axar Patel got Venkatesh Iyer for 6. KKR lost two wickets in the Powerplay. Now all that DC needed was to keep the tempo and not allow Shreyas Iyer and debutant Baba Indrajith to settle.

Pant brought in his trump card Kuldeep Yadav after the Powerplay and the spinner gave his captain the desired results — he first had Indrajith caught at long on before trapping Sunil Narine leg before for a golden duck to reduce KKR to 37 for 4 in 8 overs.

Kuldeep then bowled the 10th over where he gave away 10 runs. When he was brought back in the 14th over, he once again struck twice. He first had Shreyas chasing a widish ball; the KKR skipper was caught behind, Pant taking a good low catch.

Two dots later, Kuldeep got the big wicket of Andre Russell for a duck. Dre Rus danced down the track, missed the ball completely and was stumped.

Kuldeep’s twin strikes in each of his two spells dented KKR’s hopes to get a big total. Having dismissed the set Shreyas and then Dre Rus was the highlight of his spell. On Thursday, he had enviable figures of 4 for 14 in his 3 overs against KKR, his former IPL franchise, which didn’t give him a single game last season.

Kuldeep has been a revelation this IPL, his mindset seems fresh, his body language radiating confidence.

‘This is the best IPL season for me. I am enjoying my bowling,’ Kuldeep said after the match. ‘I don’t think what the batter will do and what if I get hit. My focus has been to bowl the right line and length.’