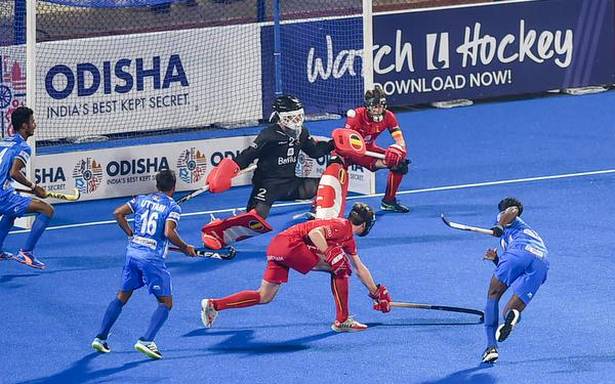 India followed the ‘team first’ mantra in letter and spirit to beat a formidable Belgium 1-0 and enter the semifinals of the men’s hockey Junior World Cup at the Kalinga Stadium here on Wednesday.

The Indian defence, which had let the team down against France, held tight to play a significant role in the quarterfinal victory. The midfield, led by ‘Player-of-the-match’ Vishnukant Singh, and forward line complemented well to complete a fine performance. India withstood the pressure well in the opening quarter.

The home backline, led by Sanjay and Yashdeep Siwach, stayed focused and maintained its structure to deny Belgium an early advantage. Good tackling and timely interception were the other highlights of the host’s solid defending.

India’s perseverance in launching counterattacks paid off when it got a penalty-corner in the 20th minute. A beautiful variation, with Sanjay turning the ball to Sharda Nand Tiwari and the latter flicking high into the right corner, resulted in the all-important goal.

The atmosphere turned electric, thanks to the few thousand select spectators, and it made a real difference. The home boys grew in confidence to defend heavily. They went into the halftime with a psychological advantage.

The home side survived the second and third penalty corner attempts in the final period. The two goalkeepers, Prashant Chauhan and Pawan who were brilliant under the bar, hugging each other spoke a lot about the team spirit.

India will face Germany, while Argentina will meet France in the semifinals.