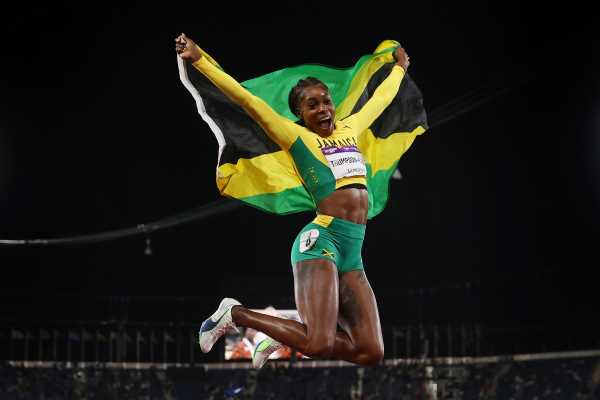 Elaine Thompson-Herah, the only one of Jamaica’s “Big Three” women to show up at the Commonwealth Games, was rewarded with the 100 metres gold medal on Wednesday, while Kenya’s Ferdinand Omanyala powered to the men’s title.

Thompson-Herah, twice the 100/200m sprint champion at the Olympics, finished third in last month’s World Championship 100 final behind Shericka Jackson and Shelly-Ann Fraser-Pryce. She was originally only a reserve for the Commonwealths but when Fraser-Pryce opted out, she stepped in.

With Dina-Asher Smith, fourth in Eugene, also absent through injury, Thompson-Herah was the clear favourite for her first individual Commonwealth title. She had looked a little tired in her semi-final but grabbed the early lead in the final and ran her usual smooth race to finish a comfortable winner in 10.95 seconds.

“Feeling good, I didn’t have the best execution but nevertheless I had to dig for that one but I am still grateful to win my first Commonwealth Games,” she said.

Saint Lucia’s Julien Alfred was on her shoulder throughout for silver in 11.01 while England’s Daryll Neita recovered well from a terrible start to grab bronze in 11.07. Omanyala, who set an African record of 9.77 seconds last year, served a 14 month doping ban four years ago. He failed to make the final at last month’s World Championships after arriving in the United States hours before the heats due to visa problems.

Impressive in the semi-final he looked the favourite on Wednesday and duly controlled the final from gun to tape, flying out of the blocks and surging clear and looking more like a barrelling rugby prop than a sprinter to win in 10.02 seconds.

He is the second Kenyan to take the title after Seraphino Antao in 1962, when the event was still run over 100 yards.

South Africa’s defending champion Akani Simbine took silver in 10.13 with Yupun Abeykoon from Sri Lanka getting the bronze in 10.14s. Scotland’s Eilish McColgan followed in her mother’s footsteps when she won the Commonwealth Games 10,000m title in gritty style earlier on Wednesday, battling past Kenyan Irene Cheptai for an emotional victory in a Games record time.

Liz McColgan won the same title in 1986 and 1990 – as well as the world title in 1991 – and Eilish has now written her own script after a series of big-event near-misses.

She set a strong early pace on Wednesday and was eventually left alone with Cheptai for the final four laps before gritting her teeth to surge clear over the last 150 metres and win in 30 minutes 48.60 seconds.

Kenya’s Sheila Kiprotich took a brave bronze after appearing to suffer an injury with more than a mile to go but limping on to finish clear of Uganda’s defending champion Stella Chesang.

“It’s just been such an up and down year with COVID, another illness and a couple of other niggles,” she said.

“Having my family here was great and the crowd on the last 200m it was vibrating through my body. I have never sprinted like that in my life and without the crowd I could never have done that.

“This is my third Commonwealth Games and my fourth (different) event so I finally found an event. I came sixth every time so to win it tonight was so special. You could see I wanted gold.”

Mother Liz added: “To witness your daughter win in the same event is incredible – she just ran the race I knew she was capable of running.”