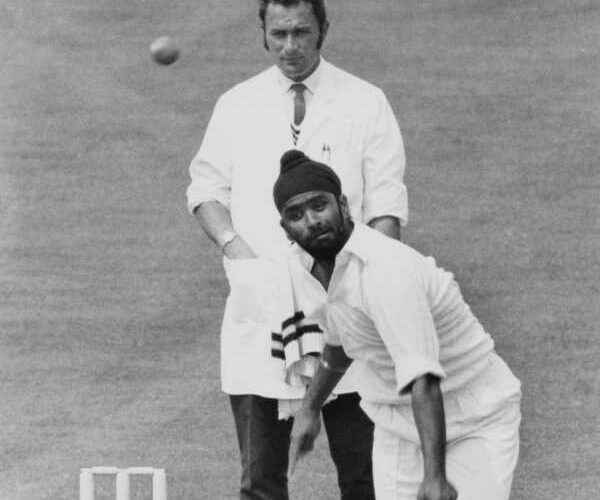 ‘I have seen Bishan paaji get worked up when he felt the game was losing its character because of some individual.’ Cricket in its various variants is never dull. Die-hard cricket fans follow their favourite cricketers not only through their performances on the field; they also follow their personal lives off it.

The cricketers themselves, who remained tight-lipped during their professional careers, reveal the stories of their lives when they write a book.

After Sunil Gavaskar’s Sunny Days that was written in the late 1970s, it was Sachin Tendulkar’s Playing My Way that sold well.

Numerous people asked the enigmatic Salim Durrani to write a book. He was a colourful personality and his book would have been a good seller.

Similarly, the world of cricket could not know the stories of Vinoo Mankad and Lala Amarnath as they never wrote a book. This book is the outcome of the hard work undertaken by former Delhi skippers Venkat Sunderam and Sachin Bajaj and has been published by Roli Books to mark Bedi’s platinum jubilee. Kapil Dev has written the foreword to the book and, like many, has chosen to address Bedi as paaji, which in Punjabi means big brother.

‘I was fascinated by GRV (Viswanath). I came to know Sunny (Gavaskar). Played with Sachin Tendulkar and Mohammad Azharuddin. But there was no one like Bishan paaji.

‘I can’t do justice writing about such a large-hearted man who believed in living life with a very positive attitude. To know Bishan paaji was like knowing all the good things of life and cricket.

‘I have seen Bishan paaji get worked up when he felt the game was losing its character because of some individual. He told me early in my career that one had to respect the game because it gave you your livelihood.

‘He had no grey colours in his life.

‘He revered cricket and I came to pick this trait from him. If I could achieve something in cricket, I would say his teaching showed me the way. He was one of the finest cricketers and he was also one of the finest speakers on the game,’ writes Kapil.

‘As a young child, I had heard stories of the famous and formidable spin quartet of Erapalli Prasanna, B S Chandrasekhar, S Venkataraghavan and Bishan Singh Bedi.

‘About Bishan paaji, I had heard tales of how he bamboozled the batsmen with his guile, flight and turn that often left them stranded.

‘I was told watching him in action was a delightful experience and I must say it was indeed very special when I first saw him at the camp where he often bowled in the nets.

‘Watching the ball come out of his hand looked like a natural act — as if he had not retired at all.

‘Cricket was his life. It has been his life.

‘How he loved those physical drills. Once, I remember, he took us on an uphill run and it tested the physical capacity of many players.

‘Now that I look back, those lessons served us well.

‘Bishan paaji had made fitness drills mandatory in 1990; today, they are an essential part of preparing for any match. That is why I say he was ahead of the times.

‘Off the field, he would talk to us for hours and he had an uncanny knack of describing stories from his playing days in a very entertaining manner.’ Sunil Gavaskar and Bedi were not on the best of terms but Gavaskar wrote:

‘During the last Test match of India’s triumphant tour of the West Indies in 1971, I was floored and honoured when, in Trinidad, Bishan Singh Bedi — who had become a father during the game — decided to name his firstborn, Gavas Inder Singh.

E A S Prasanna, Bedi’s spinning companion in many a Test, wrote briefly:

‘Bishan, being a genius in the art of spin bowling, is an excellent human being.

‘As a captain, he was strong in his views and he was prepared to stick his neck out; not concerned over what others might think about his decision, he would give it a try.

‘He was strong-minded, believed in enjoying the game and had a professional attitude towards it.

‘I want to say: He was God’s gift to this glorious game, and in particular, Indian cricket.’ ‘Bishan, along with our unique spinning quartet, was simply outstanding.

‘When I was 16 years old, I got the opportunity to keep wickets for the great Vinoo Mankad; and what a great experience it was to keep for one of the greatest who played our wonderful game.

‘Keeping for Paaji, as I affectionately called him, was a similarly great experience.

‘Such an easy, beautiful action (poetry in motion), Paaji was not afraid to be hit out of the park as he was constantly after the batsman with his subtle variations of ‘The Armour’.

‘On my second series of the elite World XI in Australia, Bish and our batting great, Sunny Gavaskar, were my teammates, and what a great honour that was for our Mother India: to have three players from our country to be included in the elite World XI.’

The Sardar Of Spin is a standalone book and, with such a large number of contributors writing about the life and times of the great spinner, it would certainly entertain and enlighten.