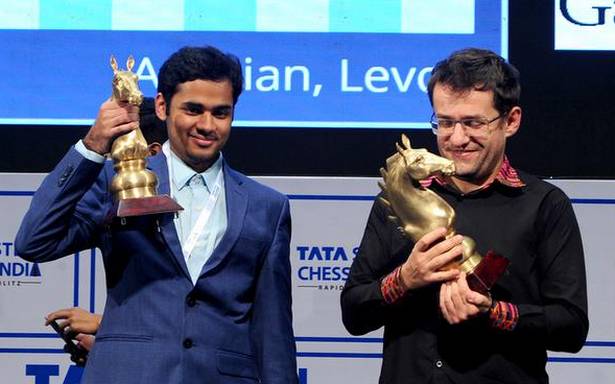 Wins Armageddon after the two finish with 8.5 points and tie-breaker games end in draws

Levon Aronian likes this city and will like it more.

The Armenian won the blitz event of the Tata Steel Chess at the National Library on Sunday. But only after quelling a strong challenge from Arjun Erigaisi in the Armageddon could Aronian lay his hands on the trophy.

It may have been a disappointing end to the incredible run for the 18-year-old from Telangana, but it still turned out to be a great tournament for Arjun, who won the rapid section and tied for the top prize in blitz.

After the end of 18 rounds of blitz, Arjun and Aronian were both on 8.5 points, forcing a tie-breaker. The tie-breaker games — Arjun had a clear winning chance in both — were drawn. In the ensuing Armageddon, Aronian won with white pieces.

Aronian will have more reasons to like the City of Joy when he goes on a tour, guided by his friend and Grandmaster Surya Shekhar Ganguly, on Monday.

The results (Indians unless specified):