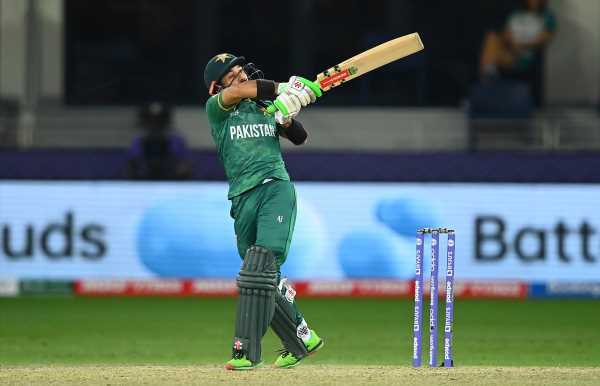 Images from the T20 World Cup semi-final between Pakistan and Australia, in Dubai, on Thursday.

Mohammad Rizwan punished Australia for two dropped catches to post his third half-century in the T20 World Cup as Pakistan posted an imposing 176 for 4 in the second semi-final of the tournament, in Dubai, on Thursday.

It was the opener’s tenth fifty of an extraordinary 2021 that has seen him become the first batter in T20I history to score over a thousand runs in a calendar year.

Rizwan’s innings wasn’t without chances, with Pakistan given a major let-off early on when he was dropped by David Warner without scoring. The opener went for a big hit off Glenn Maxwell and miscued it, but Warner, running backwards and watching the ball drop over his shoulder, couldn’t hold onto the catch and watched as it trickled away for four.

Pakistan and Rizwan had another lucky break off the final delivery of the Powerplay, when Adam Zampa got his hands to what would have been a spectacular catch in the deep, but couldn’t hold on.

Rizwan was also on the receiving end after he completely missed a short ball from Mitchell Starc which clattered straight into his helmet and left him needing treatment for some bruising to the side of the face. Rizwan and Babar Azam got Pakistan off to a flier after losing the toss and being put in to bat, putting on the biggest opening stand against Australia in the tournament.

But skipper Azam fell off the final delivery before the drinks break, caught in the deep off Adam Zampa for a typically fluent 39 off 34.

Pakistan were reduced to 71 for 1 after 10 overs, but did well to add 105 in the following ten, thanks largely to Rizwan and Fakhar Zaman. Rizwan was dismissed by Mitchell Starc in the 18th over after brilliant 67 off 52 balls and Pakistan were reduced to 143 for 2.

But the platform he had laid did not go to waste as Zaman produced a stunning display late on, smashing 55 not out off 22 deliveries including two enormous sixes off the final over after

Asif Ali (0) and Shoaib Malik (1) were both dismissed cheaply.