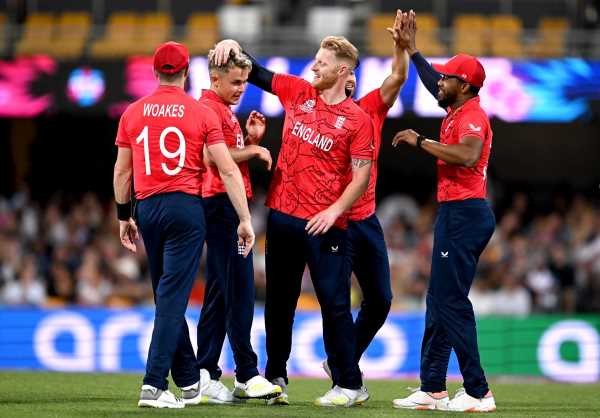 Jos Buttler smashed 73 off 47 balls and Alex Hales made 52 to power England to 179-6 after electing to bat in the Super 12 contest.

Phillips threatened to pull off an audacious chase bashing 62 off 36 balls but had little support from anyone barring skipper Kane Williamson (40).

New Zealand are still top of Group 1 on superior net run rate, followed by England and Australia though all three are level on five points.

It was a must-win match for England following their defeat to Ireland and the abandonment of last week’s encounter with champions Australia.

Hales accelerated after relatively quiet four overs, hitting Tim Southee for a six and two boundaries in a rematch of last year’s semi-finals which New Zealand had won.

At the other end, Buttler was on eight when he began to walk off after Williamson appeared to have taken a diving catch at cover.

Replays, however, confirmed the ball had burst through the fielder’s hands and hit the turf before a tumbling Williamson clutched it against his chest.

Hales fell immediately after completing his fifty and Buttler got another reprieve at 40 when Daryl Mitchell dropped him at deep mid-wicket.

Buttler smashed two sixes and seven fours and became England’s most prolific batsman in T20 Internationals before being run out in the penultimate over of the innings. New Zealand were 66-2 at the halfway stage in their reply, though it could have been worse but Moeen Ali dropped Phillips when the batter was on 15.

Phillips, who smashed a century against Sri Lanka on Saturday, gleefully capitalised on the reprieve to reach his fifty in 25 balls.

Ben Stokes broke the 91-run stand when he ended Williamson’s run-a-ball knock and England were effectively assured of victory when Phillips holed out in the deep in the 18th over.