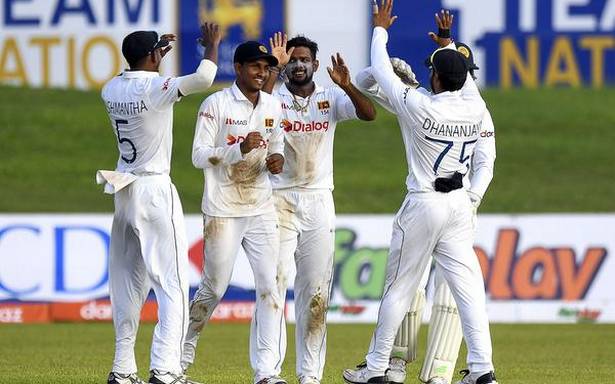 West Indies in a poor way at 113 for six

West Indies was on Monday in deep trouble in the first Test against Sri Lanka as it collapsed to 113 for six at stumps on day two in reply to the host’s first innings total of 386.

After the Lankan quicks failed to take a wicket, the spinners made hay as off-spinner Ramesh Mendis claimed three wickets and left-arm orthodox duo Praveen Jayawickrama and Lasith Embuldeniya shared three wickets between them.

Two in two for Mendis

Jayawickrama had Nkrumah Bonner gloving to the first slip before off-spinner Mendis came into the attack in the 32nd over replacing Jayawickrama. Mendis claimed with the last ball of his first over when Brathwaite, who had looked solid on his way to 41 (7×4), was caught at leg-slip.

Mendis struck again in the first ball of his second over when Shai Hope was snapped up by Oshada Fernando at short leg for 10. Hope had come in as concussion substitute for Jeremy Solozano.

Earlier, West Indies bowled out Sri Lanka for 386 with Roston Chase claiming a five-wicket haul. Among his victims were Dimuth Karunaratne whose scored a classy 147.

Karunaratne was involved in two hundred plus stands with Pathum Nissanka (56) and Dhananjaya de Silva (61). Chandimal chipped in with 45 runs.