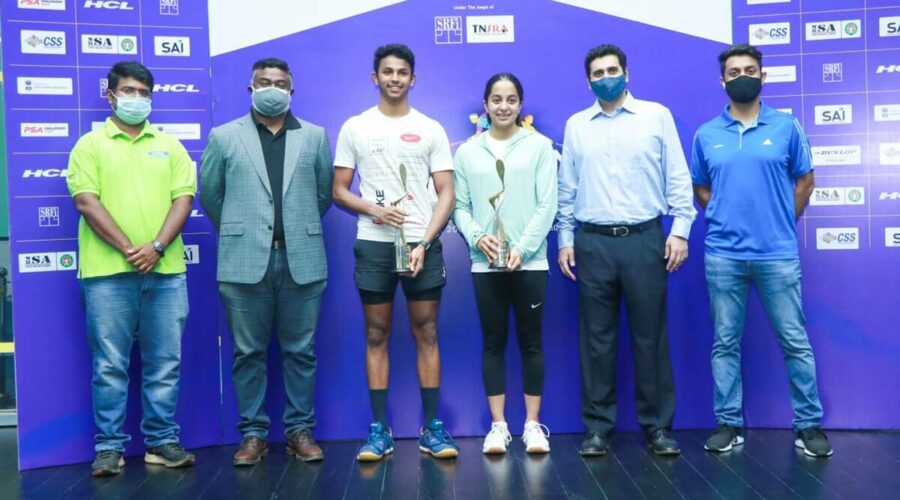 Velavan Senthilkumar and Tanvi Khanna have taken the titles at the HCL SRFI Indian Tour – Chennai 3, with the later claiming her maiden victory on the PSA Tour. Even though there was little to differentiate between the two, it was the Delhi player who kept her poise at the crucial junctures and went home with the champions trophy while pocketing 200 PSA points.

Both have played for India in the 2018 Jakarta Asian Games and later in the Kathmandu South Asian Games bringing home laurels, but on Thursday, inside the ISA glass court, both fought tooth and nail. As Sunayna stepped up her game by bagging second and third games after conceding the first rather tamely, Tanvi dug in to win the fourth.

In the decider, the Chennai girl was in a punishing mood even though she was trailing 2-5. The game also witnessed scintillating rallies as Tanvi too raised her game and equalised several times. Both survived two championship points each before Tanvi wrapped up as Sunayna committed unforced errors.

“I was edgy no doubt but I fought well too. I would like to dedicate this triumph to my coach Druv Dhawan and Deepak, my trainer. This success is because they both pushed me beyond my limits. There were times when I gave up but Druv made sure I didn’t lose out,” said Tanvi, 25, who graduated in psychology from New York three years back. After playing another PSA event at Noida next week, Tanvi plans to play more abroad provided she passes Covid-19 barriers.

Abhishek began with unforced errors but poor service and finishes added to his woes as he looked nervous too. The Salem boy, 23 who is pursuing psychology at Columbia University, showed his agility in the courts sending playing shots to both corners. Abhishek, 28, even employed drops shots to unsettle Velavan, 23, but in vain.

“Six months before the pandemic hit, I was with fitness couple Bet and Victor in Barcelona. Even during the lockdown I followed their instructions and I was never off the courts either,” said Velavan who hails from Salem and picked his first PSA title in 2018 at Madison, the US.

“My workouts show how better I am now,” said the 2016 Asian Junior Squash champion and the 2017 British Junior Open.

Velavan also informed that he will turn once “I complete my graduation in 2022. Till then I’ve planned to add more PSA points by playing more PSA tournaments in the US,” Velavan said.