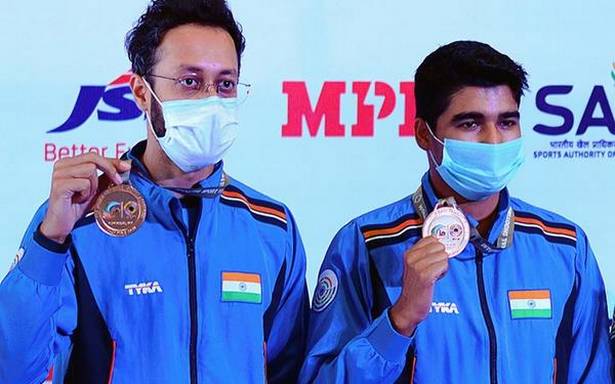 The air pistol ace has made rapid strides despite starting late.

From obscurity to World No.1 in air pistol, it has been a quick progress for Abhishek Verma.

The 31-year-old, who practises as a lawyer at the Punjab and Haryana High Court, had a meteoric rise after winning the Asian Games bronze in Palembang on his international debut in 2018.

From starting to shoot as a hobby in 2015, Abhishek is all set to strike a medal in the Tokyo Olympics. “When I won at the Asian Games, I felt that I can do something for the country in shooting. Later in 2019, when I won gold in the Beijing and Rio World Cups, I started believing that I can do that in the Olympics,” said Abhishek in a media interaction arranged by the Sports Authority of India (SAI).

In his maiden World Championship in Changwon, Korea, after the Asian Games, Abhishek made the final. In the World Cups Finals in 2019, he was fifth in Putian, China.

Returning to international competition after the pandemic, Abhishek was in good form at the World Cup in Delhi, winning an individual bronze while compatriot Saurabh Chaudhary took the silver.

Between the two, they had swept all the four gold medals in the World Cups in 2019.

“Age is no factor in shooting. Saurabh is 18 and doing so well. I give my example to people who ask me on the social media. I started when I was 27, and because of hard work, I am in the Indian team. You have to give it 100%,” said Abhishek.

“Abroad, food could be a problem. I have kept myself ready. I have got dumbbells to simulate dry firing during quarantine. For COVID, I have got mask and sanitiser. I have two pistols ready, well serviced,” said Abhishek, expressing his readiness for the final stretch of preparation in Croatia before the Tokyo Games.

Abhishek is yet to feel the pressure associated with a big event like the Olympics. “I think we will get to feel it only when we go to Tokyo and be in the athletes village”.