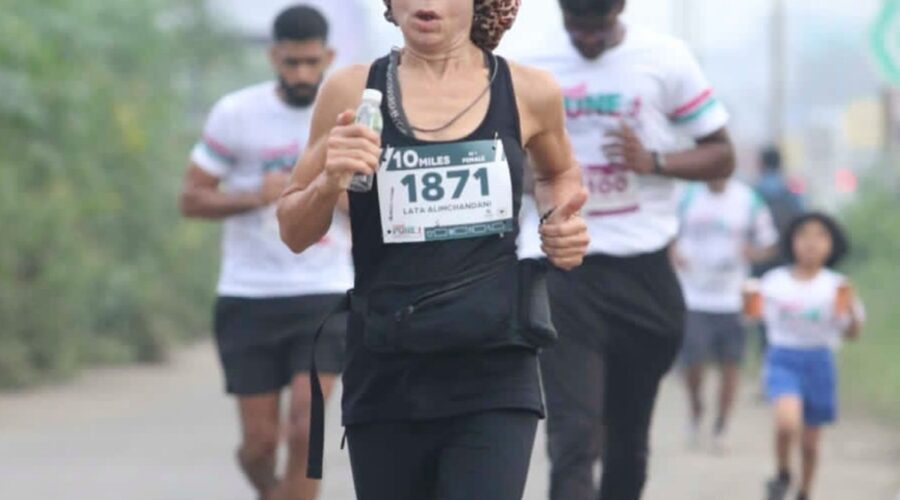 Lata Alimchandani is the first Indian woman over 60 to complete the World Marathon Majors.
She’s also among the world’s elite marathon runners in her age group.
On Monday, April 18, she will run the Boston Marathon for the fourth time. It was a grey, drizzling wet day.

The roads were dismally slippery, but the cheers of the crowd encouraged her as Lata crossed the finish line.

She had just completed the Tokyo Marathon — the fifth in her list of the elite six star marathons. Already tucked into her belt were the Berlin, Chicago, London and New York Marathons.

Lata was now one marathon away from her goal of completing the World Marathon Majors; six of the world’s largest and most popular marathons.

Her eyes were trained on the Boston Marathon, scheduled in April 2019.

To put things in perspective, only about 25 Indians had — till then — completed all six marathons; of these, only eight were women.

A determined Lata achieved her goal as she crossed the finishing line at Boston; it was the end of a back-to-back marathon effort and it made her the first 60-plus woman from India to achieve this amazing victory. A dynamic 5.2 feet, Lata — who is now 65 — stormed onto the Indian marathon scene in her late fifties.

December 16, 2013, is a date, she says, she will never forget; it was a Monday and she ran her first marathon at Pinkathon Mumbai.

“The first race,” she smiles, “is monumental for any runner.”

It was the beginning of what, she hopes, will be a lifelong obsession with running and “with understanding oneself”. Rediff.com Contributor Rohini Bhatia Singh caught up with Lata in Mumbai where she lives and is now training for the Boston Marathon 2022, which will take place on April 18. She will be running this marathon for the fourth time.

The daunting 42.195 km (26.38 miles) course is a much looked forward to event in the global running community.

The Boston Marathon averages 30,000 participants selected from approximately 35,000 plus applicants who meet the qualification standards but, due to the sheer number, do not get a place at the starting line.

It stretches from the town of Hopkinton, located around 30 miles west of Boston, through rolling terrain until it finally ends in the city after which it is named. 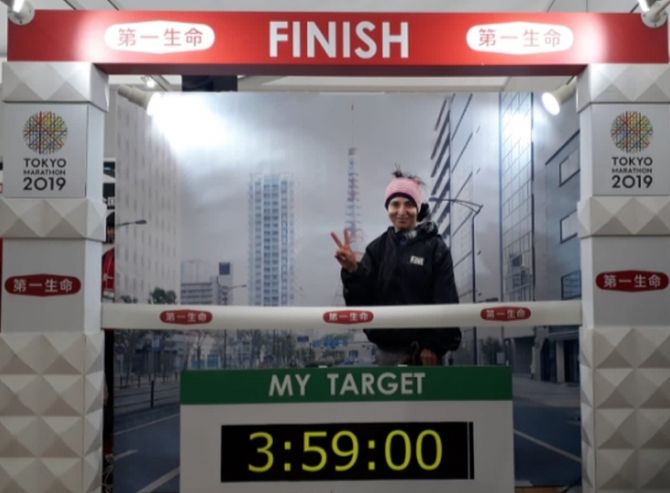 Her age is not the only reason why she stands out. Lata is a brain tumour survivor as well.

“It is important to seize the day,” she says. “I want to live today. Who has seen tomorrow?”

Her zest for life has won her many admirers — not just among her family and friends but all over the world as well. “I was operated for a brain tumour in 2005,” she says softly, “and I struggled with depression for three years. I didn’t do much. I never left home. It was a tough time for both me and my family.”

But she couldn’t permanently tamp down her desire to learn something new.

“It’s something that I just can’t resist,” she grins.

So, in 2008, she finally joined an aerobics class.

“This ignited a passion for physical activity; I met new friends and became part of a running fraternity,” she says.

Coaxing and supporting her on her journey was “the unfaltering love and support of my husband, who accompanies me during long training runs. He wakes up early and drives me to various locations.”

Guloo-Mohan, her husband, says firmly, “Lata’s consistency, determination and focus are the secrets of her success.” For Lata, running was a way to push her body and see what it could achieve.

“We can strive for, and attain, what seems impossible at first.

She is humble about her achievements, generous with her advice and has an infectious laugh.

“Believing in my dream,” she says, “and working towards it has been my greatest achievement. Fresh from Sri Lanka, where she placed first in her category in February, Lata has been training diligently, waking up in the wee hours of the morning to complete the long runs on different terrains as a part of her intensive daily regimen.

“To me it is not training. I need to run and I try not to miss a day,” she avers. “Since I started running competitively, I have added other important components beneficial to overall fitness such as strength, endurance, stretching and weight training.”

Most marathon runners say they compete with themselves and not against each other.

When asked what factors can affect a race, she recalls, “In March 2019, when I was running in the Tokyo Marathon, it was raining heavily. I was soaking wet despite wearing plastic outerwear.

“The weather can impact your run, especially if you have to navigate through puddles and slippery patches of road. But, at that point, I don’t think about it because there isn’t much you can do.”

She adds, “The weather in Boston has not always been conducive to aligning with a runner’s stride. If it is raining or cold — it was 1 degree Celsius one week before Boston 2019 — it doesn’t correspond well with the never-ending ups and downs of the slopes.” As a runner, she says, she doesn’t check her watch and laments that, if she had, she could have kept her time within four hours.

“I believe you should listen to your body all the time and not just when running.

“I try and adjust my training, my food and sleep to the rhythm of my body.”

What does she feel about being an inspiration to women her age?

“I love the thought. I try and mentor other runners though running is truly an individual sport.

“Whether you are into fitness seriously or just having fun, it is most important for women to have interests outside their family and home.” #Lata averages 50-60 km per week. She usually runs for 3-4 days in a week at various locations and on different types of terrain in different areas of the city.

#She eats lots of vegetables.

#She includes whey protein in her diet.

#When training, she avoids sugary beverages and limits her intake of caffeine.

#She drinks a lot of water.