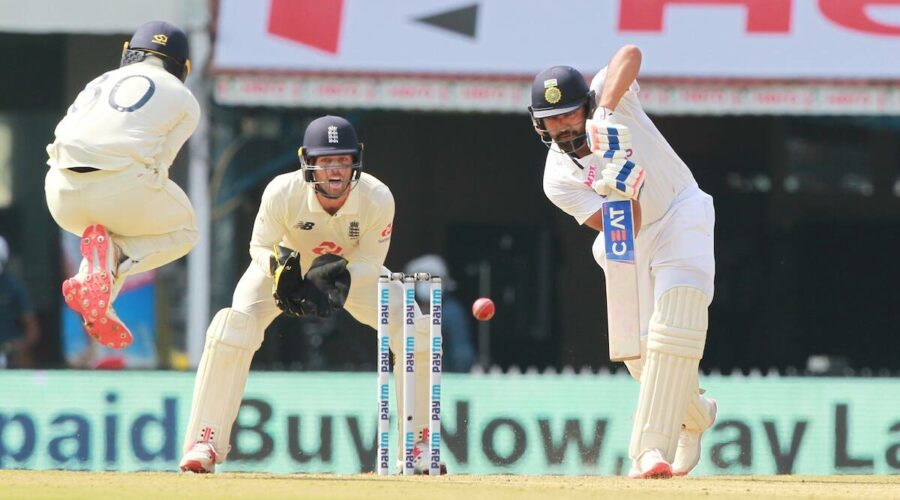 Rohit Sharma brought up his seventh Test century against an in-form England, hitting 14 fours and two sixes on the first day of the second Test at the Chepauk Stadium in Chennai. After a dismal show with the bat in the series opener, Rohit Sharma silenced his doubters by scoring his seventh Test century on the first day of the second Test against England at the MA Chidambaram Stadium in Chennai on Saturday.

India won the toss and elected to bat first in the morning but soon suffered a setback because of Shubman Gill’s early departure to pacer Olly Stone.

Afterwards, Rohit added 85 runs for the second wicket with Cheteshwar Pujara and appeared to be steering India to a good position before the spinners struck. First, Jack Leach tossed one up to get Pujara edge one to Ben Stokes at slip before Moeen Ali scalped the prize wicket of skipper Virat Kohli just before lunch break.

In the second session, Rohit continued his fine show of form and brought up his ton against a spin-heavy bowling attack of the opposition. During his 130-ball hundred, the 33-year-old opener hit 14 boundaries and two humongous sixes.

Rohit is currently joined by Ajinkya Rahane in the middle and both of them have stitched a valiant fifty-run fourth-wicket partnership.

After Rohit reached his hundred, he became the first India player to score each of his first seven centuries at home, overtaking Mohammad Azharuddin’s previous record of six. He also became the only player to have tons in all formats against four teams, namely England, South Africa, Sri Lanka, and West Indies.

Ahead of the second Test, vice-captain Rahane had also backed Rohit.

“Rohit is an important member of our team. A big score doesn’t mean you have to make 100 or 150. In Australia, he batted well, made important contributions. See if someone has one off-day, plays 3-4 bad innings, it doesn’t mean that he is a bad player. You have to back your player,” Rahane told the media on Thursday.

In-form Mohammed Siraj returned to the playing XI along with chinaman Kuldeep Yadav, who replaced Washington Sundar to play his first Test in two years.