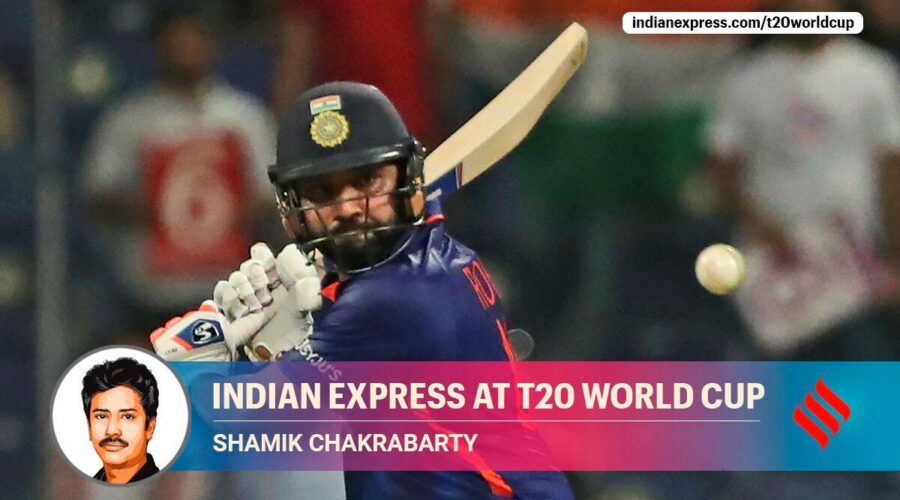 The authority in his voice was unmistakable. Rohit Sharma’s press conference after India’s win against Afghanistan felt like an audition for the bigger responsibility that lies ahead.

The authority in his voice was unmistakable. Sample this: “What they do for their franchise is really not my concern. What they do here at the moment is my concern, and we have laid out the role pretty clearly as to what they have to do when they go out in the middle,” Rohit said, when he was asked how some players play different roles for their IPL franchises and if they needed a little bit of extra time to ease into their Indian team roles.

Then this, about what changed for India in the Afghanistan game compared to their first two matches. “I think the approach today from everyone was different, and I wish it was in the first two games, as well, but it didn’t happen. But that can happen when you are on the road for a long time. Decision-making sometimes can be a problem, and that is exactly what happened in the first two games,” Rohit was forthright.

In a few days, he is set to take charge of India’s white-ball cricket. This paper has already reported how the new Indian team head coach Rahul Dravid made his choice clear about the future T20I captaincy during his interview with the Cricket Advisory Committee – Rohit and KL Rahul, in that order.

It is also understood that the BCCI is looking beyond Kohli for ODI captaincy as well.

Of late, Rohit has been the cornerstone of Indian batting across formats and the first two T20 World Cup matches had been aberrations. Normality returned against Afghanistan, through a Man-of-the-Match, 74 off 47 balls, performance. The Indian openers shed caution and revelled in their fearless cricket during a 140-run partnership.

“We took our chances in the middle, and it came off, so that’s the whole game. You take your chances, (if) it comes off, it comes off. If it doesn’t come off, you have to start again from scratch. The batter who comes in has to start again from scratch. We wanted to take some risks because it was important for us when the powerplay is going on, you try and make the best use of that, and we took our chances, and it came off,” he said.

It’s still not certain if he would like to cool his heels during the home series against New Zealand to get rid of the bubble fatigue. But sooner rather than later, he will have to form a perfect working relationship with Dravid to take the Indian white-ball team forward.

Rohit spoke about working with the new head coach. “Yeah, is it official? Obviously we were playing the game, so I had no idea. Congratulations to him for coming back but in a different capacity in the Indian team. We look forward to working with him. He’s a stalwart of Indian cricket, and it’ll be nice working with him in the future.”

The interesting part of Rohit’s impending captaincy takeover would be how he uses off-spinner R Ashwin in the shorter formats. He kept his cards close, addressing it in a lighter vein to start with.

He returned to cricket. “He’s (Ashwin) someone who’s a wicket-taking option. Any time you give him the ball, he comes to take wickets. He’s not there to survive or just to bowl his six balls and get away. He’s always looking to take wickets, and when you have someone like him in the sport and in the playing XI, it gives that advantage that you have someone in the middle who can take wickets.”

After not getting a game in the Test series in England, Ashwin warmed the bench in the first two matches in this tournament as well, for Varun Chakravarthy played. On his T20I return after more than four years, the senior off-spinner showed why quality would always trump mystery in international cricket.

Whether Ashwin gets the backing of Rohit going ahead is a matter of conjecture. The real challenge could be how the team handles split captaincy, with two strong characters at the helm in different formats. Dravid probably has his work cut out.