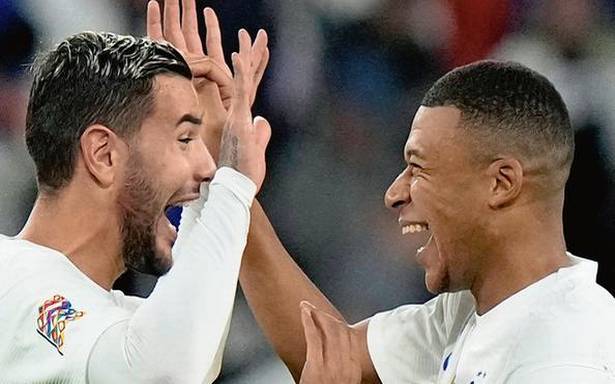 Deschamps side clawed back from a 0-2 deficit to stun Belgium; Gavi and Pino showcase their potential on the big stage

France has got its groove back as it prepares for the Nations League final against Spain on the back of a thrilling comeback win over Belgium which helped ease the pain of a poor Euro 2020.

The Nations League might not be anywhere near as important as the World Cup or Euro, but the wild celebrations among the players and a small group of France fans at the Allianz Stadium showed just how good it felt to play like a World champion again.

Asked where the win ranked on the list of his triumphs as France coach, Didier Deschamps said it was “one of the best”.

“We had one of the best, if not the best, teams in the world in front of us”

France now heads to Milan with a spring in its step, confident that it can see off a Spanish side which stopped Italy’s record run of matches without defeat at 37 with a 2-1 win on Wednesday.

‘Still one of the best’

“So we don’t win all our matches, we don’t win 3-, 4- or 5-0 all the time, but how many competitive matches do we win?” asked Deschamps. “Ok, we were knocked out of the Euro by the Swiss, but the French national team is still here and we’re still one of the best teams around.”

Roberto Martinez said after a painful defeat for Belgium that his star-studded team couldn’t handle the weight of expectation that accompanies its matches. However, France will face an opposition with a much more carefree disposition on Sunday.

The manner with which a Spanish side containing the youthful likes of 17-year-old Gavi swaggered around the San Siro at times on Wednesday suggested that Spain has genuine hope of success not just for the future, but also right now.

Barcelona midfielder Gavi, the team’s youngest-ever player, stunned everyone; Yeremi Pino was also impressive when he replaced two-goal hero Ferran Torres early on in the second half, making his international debut less than two weeks from his 19th birthday.

The FFF added that every other player returned a negative result on Saturday morning following tests on Friday afternoon ahead of the team’s departure from Turin.

UEFA rules for the Nations League Final Four say that matches will be played as long as the teams have 13 players, including at least one goalkeeper, available.

France coach Didier Deschamps currently has 21 players from which he can pick his team for the final.