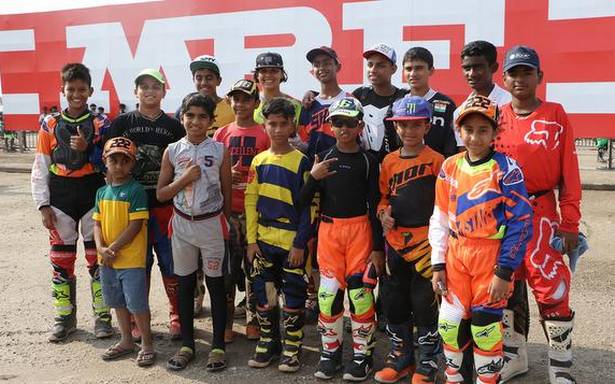 The first round of the MRF MoGrip FMSCI National Supercross championship, scheduled for Sunday at the Codissia Grounds here, has set a new record with around 175 riders registering for the event.

“This is the first time in many, many years that we have a record turnout for the National supercross,” said Shyam Kothari of GodSpeed Racing (Pune), the man behind the show.

“There were only 10 entries in the foreign class last time, this time it is 20. The biggest number is in the junior class,” said Shyam.

The riders went through practice sessions in gruelling hot conditions.

Team TVS Racing, supercross masters for over two decades, has come up with a strong rider line-up.

Anand Hariharan, Team TVS Manager , said it would be tougher than previous years.

“We want such competitions because if the event gets bigger the competition gets tight and it’s good to test our men and machines.”

“I want to make a career for my seven-year-old son . In fact, he did well in a supercross show in Sri Lanka last month and was in line to be on the podium when the championship was called off midway through due to the bomb blasts,” said Yashraj about his junior.

There is also a brother-sister combo (Tanika and Ikshan Shanbag) from Maharashtra, besides eight-year-old Akshat Hupale (Pune) and seven-year-old J. Sujan from Coimbatore in the junior class.

Even as the practice sessions were drawing to a close there was a huge storm that completely flattened the terrain.

So the start of the event has been postponed from 10 a.m. to 12 noon to get the track back into shape.