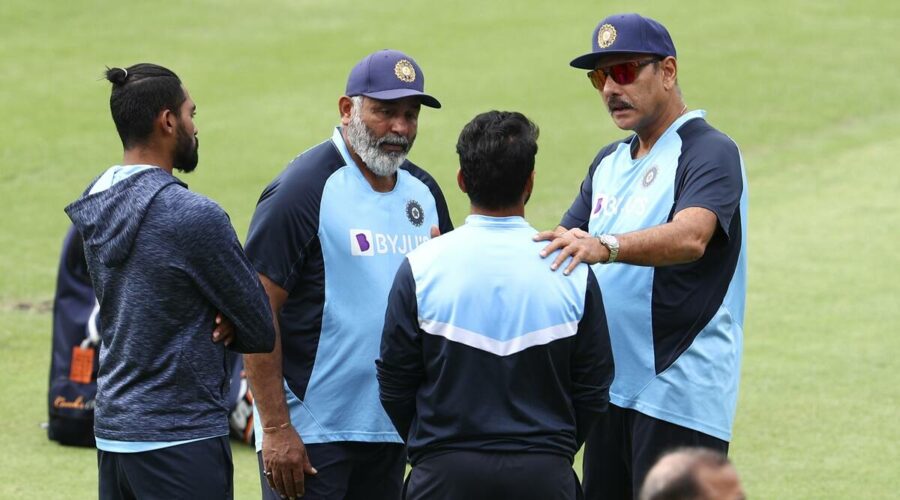 It is expected that all the three coaches will be in touch with captain Virat Kohli and batting coach Vikram Rathour, who will be in charge of the team during this period. India head coach Ravi Shastri has tested positive for COVID-19 along with two members of the support staff in the confirmatory RT-PCR tests, ruling them out of the team’s fifth and final Test against England in Manchester this week.

The 59-year-old Shastri returned positive in a lateral flow test (Rapid Antigen Test) on Sunday and on Monday, his RT-PCR test report confirmed the infection.

It is learnt that Arun and Sridhar have tested positive among the three and will remain in isolation for at least the next 10 days. The fifth and final Test is scheduled to start on September 10.

“After testing positive in two lateral flow test, Shastri has also returned a positive result in RT-PCR test. He has mild symptoms like sore throat. He will undergo 10 days of isolation,” a BCCI source informed PTI on conditions of anonymity.

“Since the Test match starts on September 10, Shastri will not be accompanying the team as his isolation period will only get over after the last Test gets over,” the source said.

Even Patel won’t be travelling to Manchester for the final game but that was pre-decided.

“Look, being close contacts, Arun, Sri and Nitin will have to undergo five-day isolation. But in any case, they were not travelling to Manchester for the final Test.

“In Manchester, the BCCI is creating a separate IPL bubble for the cricketers as there will be bubble to bubble transfer on September 15. It was pre-decided,” a senior BCCI source added.

It is expected that all the three coaches will be in touch with captain Virat Kohli and batting coach Vikram Rathour, who will be in charge of the team during this period.

“As far as physio is concerned, the team has back-up in Yogesh Parmar with the two trainers Nick (Webb) and Soham (Desai). Three masseurs (Negi, Kanade, Dayanand, also a throwdown specialist) are there for recovery,” he informed.

“There is Raghu and Nuwan and also Vikram doubles up as a throwdown specialist,” he added.

It is understood that Shastri may have developed the symptoms either during his book release function few evenings back or while using a common lift that players use at the stadium along with the VIP guests which has a minimum traffic of 5000 people.

All the players and the support staff are fully vaccinated.

09/06/2021 Sport Comments Off on Ravi Shastri tests positive in RT-PCR along with Arun, Sridhar; trio not going to Manchester
India