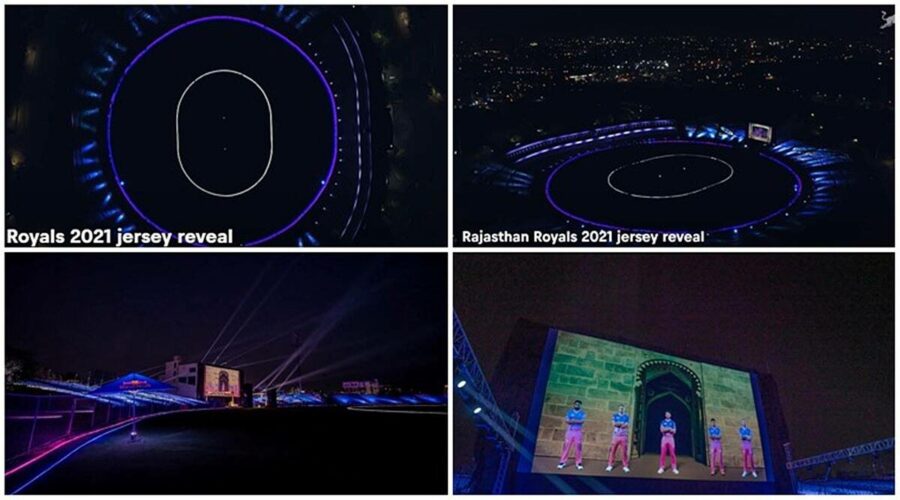 While the players of Rajasthan Royals will miss the joy of playing on a familiar pitch and the cheer and support of their fans at their home ground, the franchisee ensured that there was excitement in the Sawai Mansingh Stadium this season with a splendid live show to launch their jersey for the IPL beginning April 9.

The result was a spectacular 3D projection and light show that enveloped the Sawai Mansingh Stadium as an audio-visual showcase was live broadcast from the stadium to fans around the world and players of the Rajasthan Royals team in their bio-bubble in Mumbai.

The showcase was a celebration of everything that the Royals fans hold dear to their heart – the stadium, the city of Jaipur, the Rajasthani culture and landscape.

The show began with Sawai Mansingh Stadium being lit up, from the pitch to the stands. Following this, the limelight was thrown on a specially set up screen for the live show where a video montage of the stadium, city and Rajasthan landscape. As part of the show, the Royals players themselves were 3D projected on the screen, wearing the jersey for the new season, giving fans a first-ever look at the pink and blue jersey they will wear in 2021.

RR are the inaugural edition winners.

South African all-rounder and IPL’s most expensive auction buy, Chris Morris said, “Unbelievable reveal of the new jersey. From 2015 till now the jersey has changed a lot since the last time I played for Royals, and it is a beautiful jersey.”