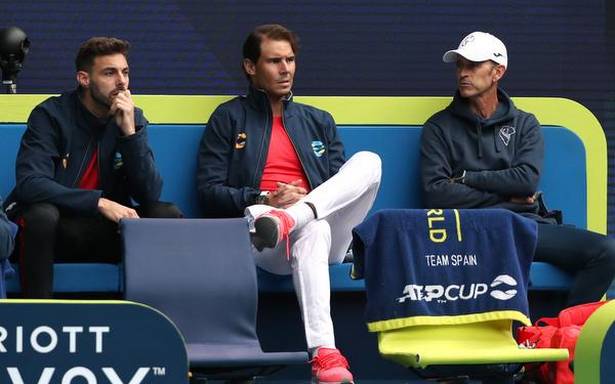 Rafael Nadal issued a statement before his scheduled match against Australia’s Alex De Minaur on Feb. 2 saying he had a stiff lower back and “hopefully I’ll be better for Thursday”

Rafael Nadal withdrew from his opening match at the ATP Cup because of a sore back but hopes to return for the Spanish team later in the week.

The No. 2-ranked Nadal issued a statement before his scheduled match against Australia’s Alex De Minaur on Tuesday saying he had a stiff lower back and “hopefully I’ll be better for Thursday”.

Top-ranked Novak Djokovic recovered from blisters that disrupted his preparation and was in his element. Serbia fans chanted and waved their national flag in Rod Laver Arena as he won his singles and doubles matches against Canada to open his team’s defence of the ATP Cup.

He beat Denis Shapovalov 7-5, 7-5 to force the deciding doubles after Milos Raonic had given Canada the lead with a 6-3, 6-4 win over Dusan Lavojic.

Djokovic then combined with Filip Krajinovic for a 7-5, 7-6 (4) win over Raonic and Shapovalov, and credited his teammate for having a big influence in the outcome.

Krajinovic "played the best shots at the most important moment of the match, without a doubt,” Djokovic said.

Last week, in an exhibition in Adelaide following a 14-day hotel quarantine — part of the COVID-19 pandemic regulations for everyone traveling to Australia — Djokovic spoke about feeding off the energy of the crowds.

At Rod Laver Arena, the main show court at Melbourne Park where he has won a record eight Australian Open titles, he had plenty of energy to feed off.

The large and loud band of Serbia supporters was a feature of Djokovic and his team’s win in the inaugural ATP Cup last year, which culminated with a victory over Nadal and Spain.

With coronavirus cases under control, the government is allowing crowds of up to 25% capacity for the tune-up events for the season’s first tennis major, rising to 50% from the start of the Australian Open next Monday.

That’s something the players haven’t experienced since the pandemic started to change the international sports landscape last March.

Matteo Berrettini said having the crowd back helped during his 6-2, 6-4 win over U.S. Open champion Dominic Thiem in Italy’s opening ATP Cup upset against Austria.

Austria had taken an early lead, with Dennis Novak beating Fabio Fognini before Berretini made it 1-1 with his singles win and then helped in the 6-1, 6-4 doubles victory to seal it.

“I’m really happy for my performance,” Berrettini said of his win over Thiem, an Australian Open finalist last year. "Playing for your country is something special.”

Kenin back in Melbourne

Sofia Kenin had a sprinkling of fans in the stands to watch her first match back at Melbourne Park since her Grand Slam breakthrough at last year’s Australian Open.

She loved it, saying she really missed her fans, although she would have enjoyed a longer stint on the court at Margaret Court Arena. Kenin had just won the first set 7-5 on Tuesday when Camila Giorgi called for the trainer and then retired from their match at the Yarra Valley Classic.

Kenin had only one match win in previous trips to Melbourne Park in 2018 and ’19 before winning her first major title here last year, when she beat local hope Ash Barty in the semifinals and Garbine Muguruza in the final. Kenin also reached the final at the delayed French Open, losing to first-time winner Iga Swiatek, and notched more match wins at Grand Slam events last year than any other woman.

“Obviously, it’s really special. Super glad to be here," Kenin said of her return to Australia. “Trying to somehow handle the emotions on court. I feel like it’s going to be a little bit of a rollercoaster next Monday or Tuesday, whenever I play. I feel like you guys, the fans, will see a little bit more emotion.

“Now it’s a little bit quiet, trying to get into the rhythm. Yeah, I’ll somehow have to figure out a way to handle nerves of course for next week.”

The Yarra Valley Classic is one of six tournaments — three women’s and three men’s — being staged at Melbourne Park this week to give players some time to prepare for the Australian Open.

Bianca Andreescu’s long absence from competitive tennis will continue for another week after the 2019 U.S. Open champion withdrew from the Grampians Trophy event scheduled to start Wednesday.

The 20-year-old Canadian hasn’t played since the 2019 WTA Trophy because of knee and foot injuries, and is coming off a hard lockdown in Melbourne.

Andreescu was among the 72 players forced into the hard lockdown after being deemed a close contact of passengers on their charter flights who returned a positive test for COVID-19 after arriving in Australia last month.

Unlike the rest of the playing group, those in lockdown weren’t allowed outside to practice for up to five hours a day.

Two-time Australian Open quarterfinalist Tennys Sandgren won his first match since coming out of the hard lockdown, beating John-Patrick Smith 6-3, 5-7, 6-4 in the first round of the Great Ocean Road Open.