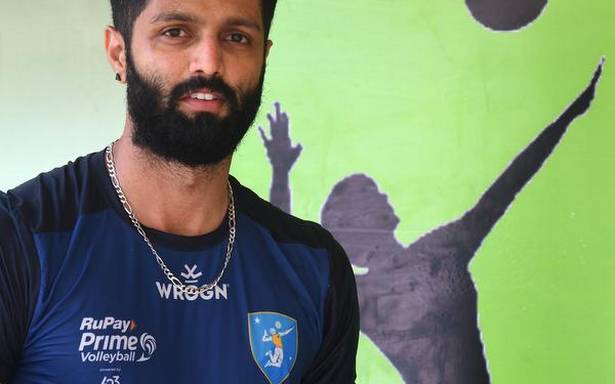 He was a decent sprinter in school in Bengaluru and later, he was into the NCC. A. Karthik came to volleyball rather late, at 18, after his dad’s friend, a volleyball referee, nudged him to join SAI, Bengaluru.

The youngster has come a long way in the sport. He is now the Indian captain, having led the country at the Asian Championship in Japan last year.

Matches in the RuPay Prime Volleyball League, which begins in Hyderabad on February 5, run on unique 15-point sets, but Karthik feels that the league could look at adopting the 25-point set which is the format the world over.

“Usually it is 25 points in volleyball and the match changes only after 15 points. So, in future, may be if they have 25 points, the normal volleyball set, that will be very good for players and the sport,” said Karthik, the Kochi Blue Spikers’ star, in a chat with The Hindu at the team’s training base at Triprayar in Thrissur.

“Wherever you go, whether it’s national or international, that’s how the format is. So it’s better we bring in 25 points. Usually, the fight will be sort of equal till 15 but after 15 or 20, the game changes, so those crucial points will be very important. If it’s 25 points, you can play well.

In 15 points, you feel the set is running too fast.”

The last PVL (it was called Pro Volley League then) was held three years ago and players hope the new league will be a regular, yearly affair in future.

With that in mind, the middle blocker feels that the league’s organisers Baseline Ventures could give teams the option of retaining their players for the next season.

“Retaining a player is better, you have a good bonding with fellow players, it’s almost like we are family. If players are willing to be retained, it’s good. Again, going into a new team, getting used to new players, it’s a big thing,” said Karthik who was with Calicut in the 2019 PVL.