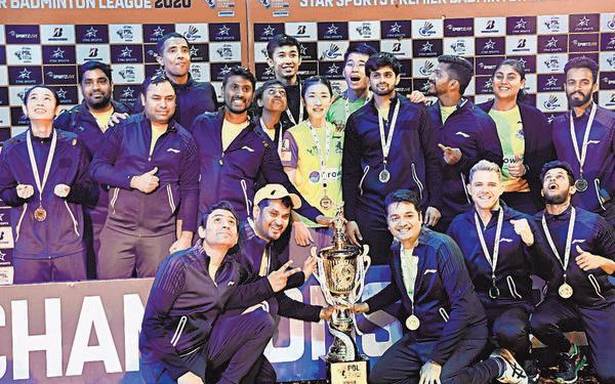 Bengaluru Raptors became the first team in the Premier Badminton League championship to win back-to-back titles when it scored a 4-2 win over first-time finalist North-Eastern Warriors in the fifth edition at the Gachibowli Indoor Stadium here on Sunday.

Once again, with scores tied two-all, it was a doubles match which decided the fate of the winner.

And, this time, the mixed doubles pair of Chan Peng Soon and Eom Hye Won, playing the Trump match for Raptors, lived up to the expectations of their team and the lustily cheering fans to outslug G. Krishna Prasad and Kim Ha Na and clinch the trophy for their team.

It was a performance which should have pleased even World No. 2 and Sai’s teammate Tai Tzu Ying.

Though he was erratic in the first game, the crowd favourite stepped into a different zone in the next two games, especially after winning the 39-stroke rally point at the start of second game.

Then, in the men’s doubles, Warriors’ pair of Bodin Isara and Lee Yong Dae, playing the Trump match, had to put the best foot forward to ward off a spirited challenge from Arun George and Rian Agung Saputro to keep their team in the hunt.

In the decider, Saputro, who was brilliant right through, faltered at 13-all with a service error and then messed up a simple net point to hand over the match and a 2-1 lead to the opponent.

For Raptors, Tai Tzu Ying remained unbeaten in this edition with another dominant display to outsmart World No. 10 Michelle Li to take the team to two-all.