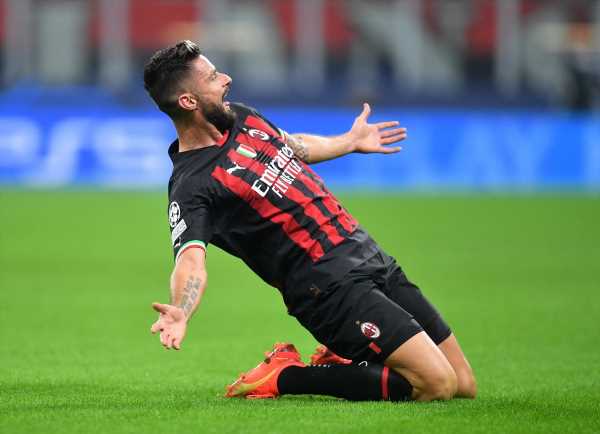 A round-up of Wednesday’s action in the UEFA Champions League.

French forward Olivier Giroud scored two goals and created another as AC Milan crushed Salzburg 4-0 on Wednesday to reach the Champions League knock-out stages for the first time since 2013-14.

Needing to avoid defeat in their final Group E match to reach the last 16 against an Austrian side gunning for the win that would take them through, Giroud settled any nerves around the San Siro with an early header into the bottom corner.

The veteran expertly headed across for Rade Krunic to make it two 43 seconds into the second half and Giroud put the game to bed in the 57th minute, drilling home after fine work from Rafael Leao.

A solo goal from Junior Messias in stoppage time capped an excellent night for Milan, who secured second spot in Group E behind England’s Chelsea.

Salzburg will go into the Europa League after finishing third.

Coach Stefano Pioli, who signed a new three-year contract this week, guided Milan to their first Serie A title in 11 years last term, but saw his side finish bottom of their group on their return to the Champions League. 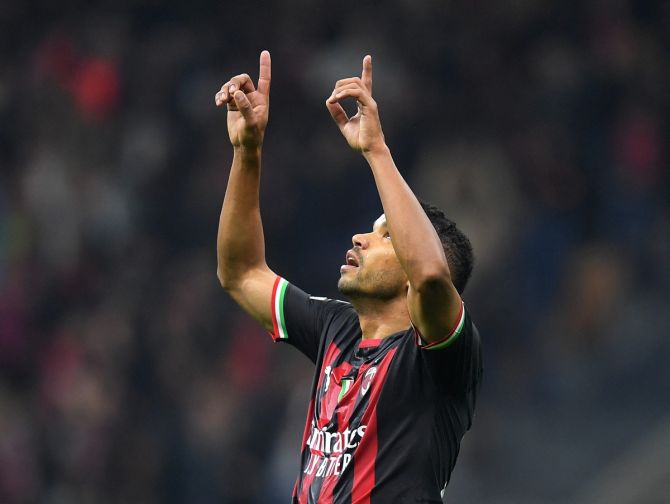 Back-to-back defeats to Chelsea this time around left the seven-time European Cup winners with plenty to do to avoid another early exit, before a crucial victory at Dinamo Zagreb last week ensured their fate remained in their hands going into the final group match.

Right from the off in their famous San Siro stadium, Milan never looked in danger of missing out again as, moments after Theo Hernandez had rattled the post, Giroud headed home Sandro Tonali’s corner.

Salzburg remained a threat in the first half but Krunic’s first-ever Champions League goal ended any hopes of a comeback.

With Giroud screaming for it in the middle as he hunted for his hat-trick, Messias stroked the ball into the bottom corner, but the night still belonged to the Frenchman.

Aged 36 years and 33 days, Giroud became the oldest player to score a brace in the Champions League for Milan since Filippo Inzaghi against Real Madrid in November 2010.

Leipzig cruise past Shakhtar to go through Christopher Nkunku scored one goal and set up another as RB Leipzig crushed Shakhtar Donetsk 4-0 to qualify for the Champions League last 16, while the Ukrainians dropped down to the Europa League.

Leipzig, who only needed a point to advance to the knock-out stage, took the lead in the 10th minute when Timo Werner’s shot was saved by Shakhtar goalkeeper Anatoliy Trubin but Nkunku was on hand to slot home the rebound.

Five minutes into the second half, Mohamed Simakan headed the ball back into the box after David Raum’s cross and it fell to Andre Silva, who doubled the visitors’ advantage by prodding the ball home at the near post from a tight angle.

Nkunku kept his composure to set up Dominik Szoboszlai on the right with an audacious flick just after the hour mark, and the Hungarian winger rounded goalkeeper Trubin before firing into the unguarded net.

Substitute Dani Olmo, who replaced Szoboszlai, piled more misery on Shakhtar moments after coming on, taking a free kick short to Kevin Kampl before cutting back inside and whipping a shot into the far corner in the 68th minute, with his effort deflecting in off Shakhtar’s Valerii Bondar.

Leipzig finished second in Group D on 12 points, six ahead of Shakhtar in third. Holders Real Madrid retained top spot with 13 points after their 5-1 home win over bottom side Celtic. Manchester City teenager Rico Lewis marked his first senior start with his maiden goal for the club to spark a comeback in a 3-1 defeat of Sevilla to complete their unbeaten Champions League group campaign.

With the prolific Erling Haaland absent as he recovers from injury, Argentine striker Julian Alvarez impressed with a goal and two assists and Riyad Mahrez was also on the scoresheet.

The night, however, belonged to Lewis.

City were confirmed as Group G winners and Sevilla assured of third spot, and Pep Guardiola made seven changes to his starting line-up with 17-year-old right back Lewis seizing his opportunity at the Etihad Stadium.

Rafa Mir gave Sevilla the lead in the 31st minute with a pinpoint header past City reserve keeper Stefan Ortega and the hosts struggled to make much impression against the Spanish side.

Guardiola took off Jack Grealish at half-time and sent on Rodri and City were a different proposition as they extended their unbeaten home run in the Champions League to 23 games.

Lewis, joined in the starting side by 20-year-old Cole Palmer, levelled in the 52nd minute when he ran on to a slide rule pass by Alvarez and lashed a right-footed shot into the net past keeper Yassine Bounou.

Lewis, aged 17 years and 346 days, became the youngest player to score on his first Champions League start, breaking the record held by Karim Benzema who was 17 years and 352 days when he scored for Olympique Lyonnais.

The 22-year-old former River Plate player produced a composed finish to put City ahead in the 73rd minute, taking the ball around Bounou and firing high into the net after being played in by a sublime pass from substitute Kevin de Bruyne.

With City dominating, Mahrez sealed the victory with a clinical finish after another assist by Alvarez.

City won the group with 14 points and Borussia Dortmund also going through to the last 16 as runners-up on 9. Chelsea midfielder Denis Zakaria scored on his debut as his side finished their Champions League Group E campaign with a 2-1 win over Dinamo Zagreb at Stamford Bridge, topping the group and ending the European campaign for the Croatians.

Chelsea, who had secured group victory with a game to spare, finished on 13 points, three ahead of runners-up AC Milan, who beat third-placed Red Bull Salzburg 4-0. Dinamo finished bottom on four points, two behind Salzburg.

Making his first start under Graham Potter, keeper Edouard Mendy got off to a dreadful start when he had to pick the ball out of the Chelsea net in the seventh minute after Bruno Petkovic gave the visitors the lead with a header.

Chelsea were soon level, Raheem Sterling making the most of a slip by Dino Peric 11 minutes later to cut inside and fire home with his left foot.

Playing his first game since joining on loan from Juventus on Sept. 1, Switzerland international Zakaria put the Blues ahead on the half-hour mark with a perfectly-placed shot after good work by Mason Mount to create the chance.

In a worrying moment for England boss Gareth Southgate, Chelsea fullback Ben Chillwell pulled up with what appeared to be a hamstring injury in second-half injury time, hopping towards the dressing room helped by medical staff as the game finished 2-1.