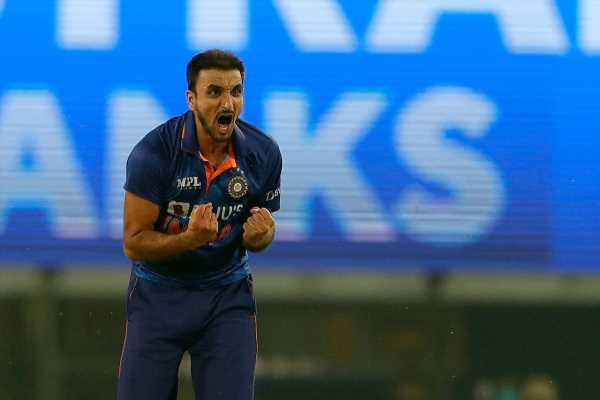 Images from the second T20 International between India and New Zealand, in Ranchi, on Friday.

India rode on tight bowling from the spin duo of Ravichandran Ashwin and Axar Patel to check New Zealand’s explosive start and restrict the visitors to a modest 153 for 6 in the second T20 International, in Ranchi, on Friday.

In a must-win match for the Kiwis, who trail 0-1 in the three-match series, Martin Guptill (31 off 15 balls) and Daryl Mitchell (31 off 28 balls) took the Indian pacers to the cleaners after New Zealand were put in to bat.

Cruising at 64 for 1 in the powerplay, the Kiwis suddenly hit a roadblock in the crucial middle overs and scored just 64 runs from overs 7 to 16, as Ashwin (1 for 19) and Axar (1 for 26) dominated the Kiwi batters in the dew-laden conditions. Skipper Rohit Sharma cleverly used Ashwin and Axar in the middle overs to restrict the run-flow and the senior spinner was sensational with his variations as the batters found it difficult to go after him.

The duo’s remarkable effort in the middle overs gave the pace attack some respite and newcomer Harshal Patel, who made his T20I debut four days shy of his 31st birthday, returned impressive figures of 2 for 25. Two days after his tidy display in Jaipur, Bhuvneshwar Kumar conceded 37 runs from his first three overs but made up for it in his final over, giving away just two runs and taking the vital wicket of Jimmy Neesham that further pegged the Kiwis back.

New Zealand were off to a flier in the powerplay as Guptill smashed his way to a 15-ball 31, which included 2 sixes and 3 fours, after being dropped on 8. Guptill smashed Bhuvenshwar for back-to-back boundaries but there was an opportunity off the fourth ball, when he mishit over the long-off region.

KL Rahul made a terrific attempt, running backwards, and nearly got hold of the ball before it slipped out of his hands.

After conceding 14 runs in his first over, Bhuvneshwar gave away 13 in his next as Guptill smacked him over his head for a six. Mitchell also joined the party as the visitors cruised to 42 from the first five overs before Deepak Chahar finally gave India the breakthrough with Guptill’s wicket.

New Zealand were 64 for 1 before the spin duo of Axar and Ashwin stepped in to restrict the flow of runs.

With runs hard to come by the Kiwi batters went for big shots as a result of which Mark Chapman was caught by Rahul at mid-off off Axar in the ninth over.

Half-way into the innings, the visitors were 84 for 2.

Things then got they got more difficult for the Black Caps after Harshal sent back Daryl Mitchell in the 12th over. 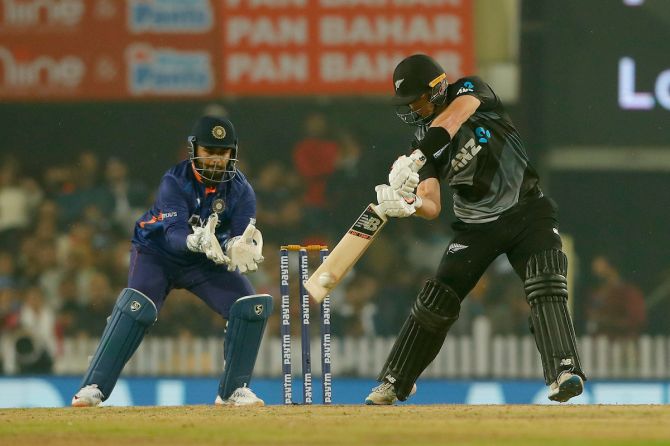 Tim Seifert joined Glenn Phillips in the middle and steadied the ship a bit, but the stand did not last long as Ashwin found himself among the wickets in the 16th over.

Harshal then struck in next over to remove the dangerous-looking Phillips.

Wickets continued to fall as Bhuvneshwar Kumar sent back Jimmy Neesham in the 18th over.

Mitchell Santner and Adam Milne failed to get the much-required runs in the last two overs, finishing unbeaten with 8 and 5 respectively, leaving India with an easy target to chase down.