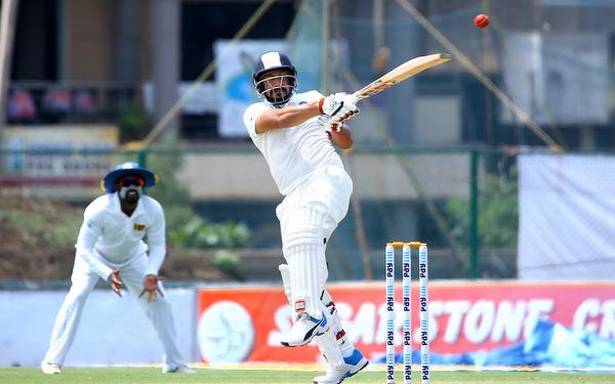 ‘The only dream that really counts is to play for India’

These are formative days in Anmolpreet Singh’s career, and who better to learn from than two bona fide legends. As part of the India-A team, he is coached by Rahul Dravid, and in the IPL, he got the chance to interact closely with Sachin Tendulkar in the Mumbai Indians team.

“Sachin sir is a legend. I was desperate to meet him,” Anmolpreet, 21, said. “One day, Sachin sir watched me bat in the MI nets. He liked my batting and complimented me. That was a big moment.”

Anmolpreet shares a similar admiration for Dravid. “I’ve watched Dravid sir bat on television — what a great batsman he was. It’s unbelievable to think that Dravid sir is now my coach,” he says.

Anmolpreet hails from a family of sportspersons in Patiala. His father was an international handball player, while Anmolpreet and his cousins were drawn to cricket.

“As a kid, I would go and watch my elder cousins play college and club cricket matches. That’s where my love for the game started. My father was encouraging, and took me to the Black Elephant Cricket Club in Patiala,” he said.

Very soon, two of his younger cousins — Prabhsimran Singh and Tejpreet Singh — followed suit and joined Anmolpreet at the club.

Anmolpreet first gained prominence when he won the player-of-the-match award in the 2016 Under-19 World Cup semifinal against Sri Lanka.

The 2019 IPL auctions then put the spotlight on his family as Prabhsimran was selected for ₹4.8 crore by Kings XI Punjab, and Mumbai Indians signed Anmolpreet for ₹80 lakhs.

The financial rewards were huge, but it wasn’t time to enjoy the spoils yet. “My father reminds us that the only dream that really counts is to play for India and to make our country proud,” Anmolpreet says.

He is taking the first steps in that direction. On Sunday, Anmolpreet made a memorable India-A First Class debut, scoring an elegant unbeaten 116 against Sri Lanka-A here.

“Having done well in my first match, the pressure has eased off a little. Now I have to carry on and score more runs for India-A and Punjab,” Anmolpreet said.

05/28/2019 Sport Comments Off on Now I have to carry on and score more runs: Anmolpreet
India