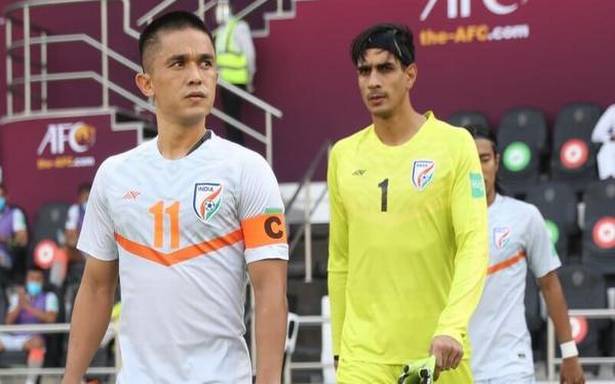 Sunil Chhetri might be among the upper echelon in global football, but he remains grounded to reality. The Indian football team captain has gone past Lionel Messi to become the second-highest international goal-scorer among active footballers, but he is quick to dismiss any comparison between him and the Argentine icon.

“That’s the reality and people who understand football know there is no comparison. What I am proud of is the fact that I have played over 100 games for the country”

Chhetri struck a brace in the Blue Tigers’ 2-0 win over Bangladesh on Monday to take his tally to 74 international goals.

He now trails only Cristiano Ronaldo, who has 103 goals. Chhetri, 36, has scored a whopping 52% — nine of 17 goals — of the national team’s goals in the last two years. The recurring talks of “who after Chhetri?” do not bog him down.

“I don’t take it as a source of pressure. I think we will get strikers who will score more than me. It is a process and takes time. We will have only four foreigners in the (starting XI) from the next ISL season and that will give time to more young strikers.

“There are only two mantras for strikers — more games and hard work. In the next 10-20 years there will be many players who will be scoring goals better than me. If you keep getting players like me we will be where we are. We will get better players and we will be better,” he said.

He stressed the need to play more passes. “I want the team to be a little bit brave with the ball. I think we understand defence, diet and how to take care of ourselves. But many people do not like that we do not keep the ball and I feel the same way.

“I also want to see my team pass more. I like passing and moving more than any other system. It means you run less and get more 1v1 opportunities and more chances.”

06/09/2021 Sport Comments Off on No comparison with Messi, says Chhetri
India