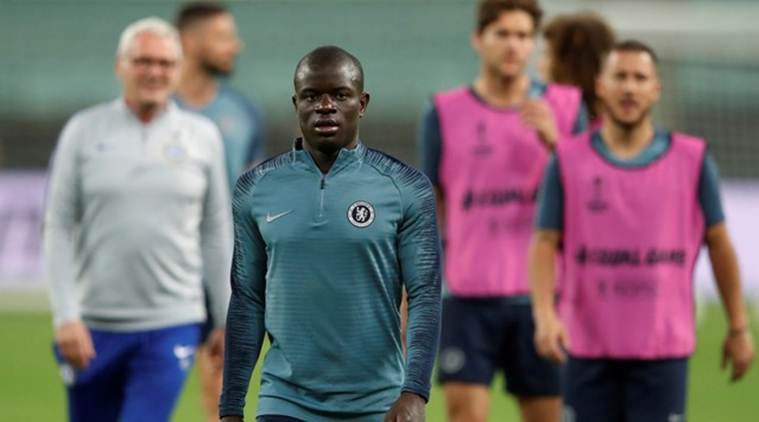 Chelsea coach Maurizio Sarri says N'Golo Kante has a 50-50 chance of being fit for the Europa League final, and that the team will be pushed to the brink without him Chelsea coach Maurizio Sarri says midfielder N’Golo Kante has a 50-50 chance of being fit for the Europa League final, and that the team will be pushed to the brink without him. Kante hurt his knee in practice on Saturday and cut short his evening training session on Tuesday as he fights against the clock to be fit for Wednesday’s final against Arsenal.

Sarri said there’s a “very little problem with his knee, the problem is the timing,” adding that the chances are 50-50 and his fitness could come down to “the last moment.”

“We are in trouble with the midfield. At the moment we have only three midfielders for three positions so we are in trouble,” Sarri said. “He is the only defensive midfielder that we have, so for us Kante is really very important. We are trying to recover him and we will try tomorrow morning.”

Kante trained separately Tuesday evening with a focus on stretches while his teammates did a passing drill, but then joined the squad for a group warm-up. However, he then trained solo again before leaving after a conversation with Chelsea’s staff.

The French midfielder has played in all of Chelsea’s Europa League knockout games this season except the second leg of the semifinal win on penalties against Frankfurt. He had a hamstring injury which caused him to miss that game and the end of the Premier League season against Leicester on May 12, but he seemed to have recovered before picking up the latest knee injury.

Chelsea is already without key midfielder Ruben Loftus-Cheek and winger Callum Hudson-Odoi. Asked about the possibility he could take the vacant Juventus coach job after just one season in England, Sarri did not rule himself out.

“I want to think only to the final of course, then I have a contract with Chelsea for two years and so first of all I will speak with Chelsea. But this is not the moment,” he said. “I have 20, 22 wonderful men and wonderful players so now I am really very happy with them. Of course I have to consider it for the future and I have to consider that I love English football, I love the Premier League.”

Sarri is looking for his first major title as a manager but rejected the notion that Chelsea’s season would be a failure if it finished without a trophy, pointing to third place in the Premier League and a run to the final of the English League Cup.

“We did a wonderful season because in the last season Chelsea wasn’t (qualified for) the Champions League and now we are in the Champions League,” he said. “We played (the League Cup) final, in a competition in which we played against Liverpool and Tottenham, and we qualified against the two finalists of the Champions League. Then we lost the final by penalties against Manchester City, in my opinion the best team in Europe at the moment, and tomorrow we will play the final in the Europa League. So I think we played a very good season.”